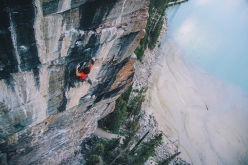 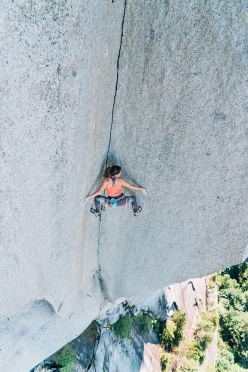 Barbara Zangerl and Jacopo Larcher repeat The Path in Canada

During a climbing trip to Canada Barbara Zangerl and Jacopo Larcher repeated a string of difficult routes, including the trad climb The Path at Lake Louise.

Give Barbara Zangerl a rock, and she’ll most certainly roll. The 30-year-old Austrian climber, fresh from her 9a ascent of the Speed at Voralpsee and the nigh 1000 meter high big wall Magic Mushroom on El Capitan in Yosemite, has just spent a few weeks climbing in Canada where she has made the first female ascent of The Path.

First ascended by Sonnie Trotter above Lake Louise in 2007 and flashed by Alexander Megos in 2016, this climb offers some important runouts between trad gear and difficulties up to 8b+. Zangerl briefly worked the route and then sent it on her last day in Canada, shortly after her partner Jacopo Larcher has repeated the route himself.

The plan had been to visit other areas, in particular the Bugaboos, but the weather proved fickle and the granite around Squamish so enticing that they mainly climbed in that area. Zangerl repeated testpieces such as Shadow and North Star on the Chief and onsighted the nearby classic Great Arch, while Larcher repeated North Star and Spirit of the west. Time and luck ran out on two of Canada’s most famous climbs, Dreamcatcher and Cobra Crack, meaning that the duo will return to wrap up unfinished business.