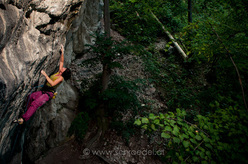 Every now and then we catch up with Barbara Raudner, the first Austrian woman to send 8c when, in 2006, she managed to redpoint Keitos Palast at Höllental. In the same crag – located in one of the most beautiful valleys in the country – Raudner has now come to grips with Indotimes, a technical and overhanging 8b+ which, despite favourable wind from the west and cool temperatures, proved no walk-over. We'll take her word for it!

While on the subkect of 8b+. In April Raudner travelled to Margalef in Spain where she sent Via del Quim 8b+, while a month previously in Slovenia's Misja Pec she sent Marjetica 8b/+.