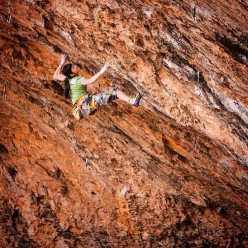 13-year-old American climber Ashima Shiraishi has climbed Ciudad de Dios at Santa Linya in Spain. This is her second 9a/+ in less than a week.

Just a few days after Open Your Mind direct 9a/9a+, an ascent that captured the attention not only of all the specialized press but also mainstream outlets such English newspaper The Guardian, American climber Ashima Shiraishi has now hit it big once again with her ascent of Ciudad de Dios.

The route in question is located at Santa Linya once again, was freed by Edu Marin in 2009 and links two existing lines, Open Your Mind (redpointed last weeks by Shiraishi) and La Fabela, and 8c+ she had already climbed a year ago.

The grade is in the region of 9a/+ and Shiraishi needed a mere three days for the send… like all the other routes in this massively overhanging grotto, the climbing is extremely burly and require superb stamina… characteristics which are anything but ideal for a young climber aged just 13!