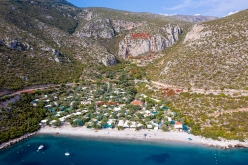 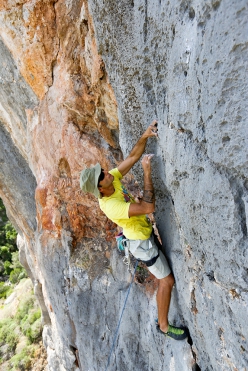 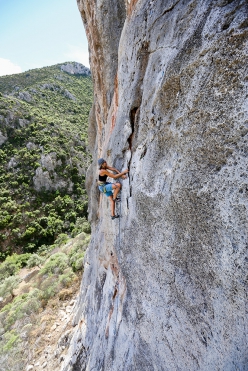 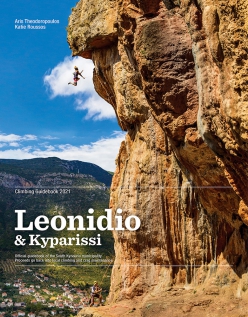 Arcadia, the new crag at Leonidio in Greece

For years, whenever we drove to Leonidio from the north, our eyes landed on a compact grey cliff opposite a campsite built on a beach just 30 minutes before Leonidio. Because the cliff is so solid and the location near-perfect for a climbing holiday, we kept it in mind as a future project and pictured all the potential routes that could be bolted. Well, the future finally arrived and the bolts were placed. Meet Arcadia.

The northeast-facing cliff is compact and excellent, though still a bit sharp. Its 42 well-bolted mid-grade routes enjoy long hours of shade. Combine climbing at Agios Andreas (morning) and Arcadia (afternoon) for day-long shade only 30–40 driving minutes from Leonidio. The campsite across the road, repodina (or rempondina), has a restaurant and a beach bar, and typically only operates in the summer, but our hope is that the new sector encourages an extension of the season.

We believe Arcadia has everything it takes to become a very popular sector. The local community was instrumental in bringing sector Arcadia to fruition. The project was funded mainly by the local municipality and prefecture, and the owners of the olive grove around the cliff graciously permitted us to bolt.

Climbing
On 42 technical routes from 5a–7a+ and up to 42m long, on excellent, Verdon-style vertical grey/orange rock full of small pockets and footholds. The rock is very compact, though still sharp at parts and sometimes lightly covered with lichen. Most grades range from 6a to 6c+. As with most new sectors, routes will benefit from traffic. The bolting is user-friendly, keeping the needs of the average climber in mind.

Approach (Walking time: 5–6 minutes)
Arcadia is 33km north of Leonidio (172km from Athens). From Leonidio, drive in the direction of Athens for 33km. Exactly 50m before the entrance of camping repodina, turn left. A narrow dirt road leads to an olive grove. (Note: There may be a chain that appears to be blocking access to the dirt road, but it is not locked. Unclip it, pass through, and re-clip the chain. We have already discussed this and gotten the “all clear” from the landowner.) Park 100m further, near some boats amidst the trees (37.328840, 22.806754). Please leave space for other cars and don’t park any further on this road, which leads to private land, and it’s hard to turn your car around. From the parking, walk the concrete road for 100m, then follow cairns to the cliff.

03.10.2014
Leonidio and the crag Hot Rock in Greece
Located in the Peloponnese, just 3.5 hours south of Athens, Leonidio is Greece's newest trendy area, with more than 20 crags and 300 routes; single and multi-pitch climbing up to 250m high, from 5a to 9a. Aris Theodoropoulos introduces one of the best crags in Europe for winter climbing.

19.12.2016
Climbing at Leonidio at the crag Twin Caves
Twin Caves, one of the best sport climbing crags at Leonidio in Greece. Presented by Vertical-Life.info as part of our series 'Crags for each season', for which the routes and topos can be downloaded free of charge until Wednesday.