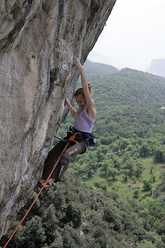 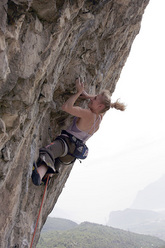 Angela Eiter has recently managed to spend some time climbing outdoors and the result is, unsurprisingly, startling. On 27 May the Austrian competition champion redpointed her hardest route to date, Claudio Caffé 8c+ at Terra Promessa in Arco, Italy.

The route is a variation to Aerodromo 8b+ which Eiter had sent last week and is completely artificial. Interestingly Eiter climbed the route without the screw-on hold, pushing the grade to 8c+. Here's the report from the woman herself:

Claudio Caffé 8c+ by Angela Eiter
The weather didn’t look good. My boyfriend Bernie and I were about to return home. After that the sun shone and we decided to stay and to climb in Terra Promessa, where my project "Claudio Caffé 8c/8c+" was. Even though I was a bit tired from the day before, where I did two good attempts in this route, I was motivated to try it again.

After having done the first hard part of the route I gathered all the rest of my power and finally I could do the very difficult crux. Now the aim was to stay cool and remain concentrated for the last hard moves… relieved and happy at the same time I clipped the rope at the top!

Claudio Caffé is a variation to Aerodromo. Therefore both these routes have the same artificial hold from a climbing gym in the crux. This hold was screwed on, because a natural hold had broken. Originally Claudio Cafe was given 8c/8c+, but without this artificial hold I think it is 8c+ and therefore my hardest redpoint to date.