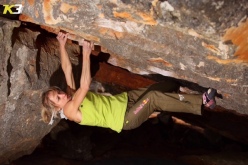 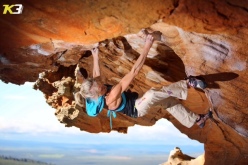 Angela Eiter boulders 8B at Rocklands in South Africa

Frauenpower. Women's power in German. A noun which couldn't be truer for Angela Eiter. Everyone knew that she is strong: four times Lead World Champion, six Rock Master titles, three World Cups to her name as well as having been European Champion indicate how talented this Austrian climber is, and all this is confirmed with redpoints on rock up to 8c+. Startling results, difficult to match, but if you really want to look for a "defect", one could say that she's not particularly good at bouldering...

Nothing could be further from the truth though, as proven by her recent visit to Rocklands in South Africa where she managed to send a host of difficult problems, including a flash ascent of In the middle of the ass FB8A and the repeat of Fragile steps FB8B. She describes her hardest problem to date as follows "A steep roof with crimpy holds. My style. On my first check out I couldn't find any solution, but after a while I did all the moves and after about 3 hours I luckily sent it."

This list of Eiter's ascents is published below, what is clear is that she too is close to adding her name to the list of female climbers who have managed to send 8B+ - the absolute female max – currently comprised of  Tomoko Ogawa, Ashima Shiraishi, Shauna Coxsey and Alex Puccio.

Routes climbed at Montagu
Jumbali, Jurassic Park 8a
My route down by the river, Waterworld 8a+