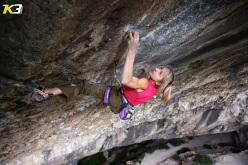 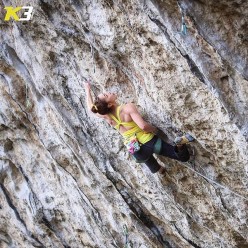 At Arco in Italy Angela Eiter has written some of her most important chapters in her competition career, winning the Rock Master six times and clinching her 4th Lead World Champion title at the legendary Climbing Stadium. It's clear therefore that her ties with this territory are strong and so, after her farewell to competions, it comes as no surprise to see her every now and then, testing herself on the splendid routes that Arco offers to all climbers.

A few days ago the 28-year-old Austrian champion added another page to her "Arco Outdoor" chapter – after her redpoint of Claudio Café 8c+ at Terra Promessa in 2007 – by repeating Reini's Vibes 8c/c+ at Massone. As Eiter told Planetmountain, this long stamina fest "turned out to be a real mental battle between myself and a long reach in the roof, on the 57th move to be precise, where I fell a couple of times." Apart from battling against the route's difficulties, Eiter also had to fight against heat and therefore "Bernie and I began climbing early, reaching the crag at 6:00am. I even managed to stick the move but unfortunately I fell 5 moves higher. I realised I needed to leave the route for a while." A while means a week, and then on her return Eiter sent the line first go on her third weekend of trying.

What makes this repeat interesting, apart from the pure physical performance, is the fact that the first attempts were carried out together with her great rival in competitions but friend in life, Jain Kim. In May the South Korean climber had travelled to Innsbruck to treat her injured knee and the two obviously leapt at the chance to climbing together, above all on Reini's Vibes where a beautiful "climbing session" together was used to find the best sequences. Eiter cheer Kim on as the South Korean clipped the anchors on her third go. "My hands were sweating as I watched here, fantastic!" exclaimed Eiter.

It's worth analyinsing Kim's latest climb briefly: known about all for her outstanding competition results (she won the World Cup in both 2010 and 2013), until the other day Kim had climbed nothing harder than 8b. Now though she's sent Reini's Vibes third go, as well as the nearby 8c Bibita biologica, second go. It's clear that given more time Kim could take things further still, but at present she hasn't got this time: the 2014 Lead season kicks off in Haiyang, China, this weekend. And Kim is certainly one of the favourites.