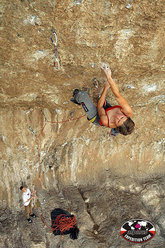 Alexandra Taistra from Poland has just spent a couple of weeks climbing in Italy where walked away with a top prize, "Die Hard" 8c at Ferentillo's Gabbio.

Taistra is no newcomer to 8c's: in 2004 the 25 year old Polish Physical Education student had already sent "Power Play" and "Nie Dla Psa Kielbasa", both at Pochylec in Poland, but this is the first time she has ventured abroad to send a route of this difficulty.