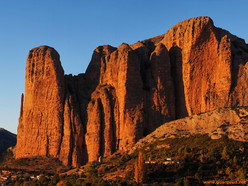 One of the most famous multi-pitch sport climbs in Spain - and Europe for that matter - the beautiful Fiesta del bíceps at the evocative Mallos de Riglos in Spain has been soloed, on-sight, by American climber Alex Honnold. The 250m high route takes a fabulous and exposed line up the La Visera face via an incredible series of enormous holds with difficulties up to 7a and had been soloed in 1989 by Carlos García. Honnold had been sport climbing at Oliana and Tres Ponts and acting on a tip-off from friends decided to visit Riglos do carry out his ascent, which he describes below. And for more images of Mallos de Riglos check out www.gdargaud.net.


Fiesta del biceps by Alex Honnold
I'd heard about Fiesta the first time I visited Rodellar 3 years ago but I never got to go. Lots of people told me how amazing it was and all my friends had climbed it. It seemed like a good candidate for soloing just because it's so popular and it's in the right grade range.

When I got there I hadn't even seen a topo, though my friend Hazel sort of described the climbing so I would know roughly where it went and what it was all about. I got up at light, or just before light really. I forget the times now but it took a little more than an hour I think, based on the church bells ringing in town. About an hour. The whole experience took about 3 hours car to car, but that includes eating some breakfast at the base and all that. It was pretty fun.

I was sort of psyched to climb on something different, just to have a new experience. It's an amazing position. I'm not used to soloing anything so steep. Normally I prefer keeping my feet on all the time but on that route it just gets more and more exposed. Pretty amazing! It was a fun little day-trip away from Oliana. A good adventure, exciting, but nothing too crazy.