► News ► Climbing ► Alex Honnold, interview after Too Big To Flail at the Buttermilks
Versione italiana 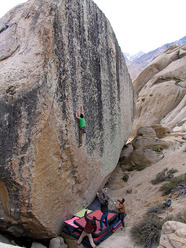 Alex Honnold going for the send of Too Big to Flail, Buttermilks, Bishop USA
Photo by Wills Young

PORTFOLIO / gallery Portfolio: Alex Honnold, interview after Too Big To Flail at the Buttermilks

Alex Honnold, interview after Too Big To Flail at the Buttermilks

A short interview with Alex Honnold after his first ascent of the boulder Too Big To Flail at the Buttermilks, Bishop, USA.

Just the other day we reported about Alex Honnold's new super highball on the Luminance Block at the Buttermilks close to Bishop. With its 7C+ technical crux Too Big To Flail isn't the hardest problem in the area, but it certainly is one of the highest and most serious. In the short interview below, Honnold now provides some details.

When did you first catch sight of it?
The project is written up in the new edition of the guidebook so it's not like it was any secret. It was first attempted by the British climber George Ullrich though he was trying a slightly different line. (Editor's note: in 2008 Ullrich managed to toprope the line but his car broke down during the approach on the last day of his trip and so he never managed to try it again.)

You worked the project on toprope.
Yes, I worked on the project for three days beforehand, one day just checking to see if it was possible and two days actually working on the moves. The rock quality is perfect, ideal for this kind of project.

The climbing is very dicy and you mentioned you got scared. More so than on other solos such as the Phoenix or Heaven?
The quote about me being scared was only referring to the usual jitters that accompany any climb like this. On the climb I actually felt very good. Much better than I had when working it on a rope. I was a little jittery, but I felt very solid and overall it was probably less scary than any of the real solos I have done, just because I had pads protecting most of the problem.

Yes, 34 crash pads... A new world record ;-)
Ha ha. It did start to feel a little silly but there is a rather large hole at the base of the problem. It could definitely be done with less though I was happy to have them all.