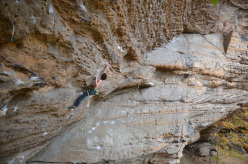 At the Red River Gorge (USA) Adam Ondra has on-sighted Golden Ticket and Pure Imagination which, as he states in his report, he feels are 8c+.

At Red River Gorge Adam Ondra has come up trumps once again after his 9a flash by on-sighting, on the same day, two of the crag's most famous climbs, Golden Ticket and Pure Imagination (rendered famous above all by Sasha DiGiulian and her first 9a ascent). Both climbs were originally graded 5.14d/9a and repeated by other climbers in the past, but Ondra feels both merit 8c+. Which would mean yet more 8c+ onsights for the Czech climber, an outstanding performance therefore (especially if you bear in mind that only the Spaniards Patxi Usobiaga and Ramon Julien Puigblanque have been capable on-sighting 8c+) but which leaves us with baited breath for the new barrier he's evidently trying to break, i.e. the first route which, he too, feels is a 9a onsight.

As usual, here's Adam's report directly from Kentucky: "Yes, in all honesty I confirm that I didn't find any of these climbs hard enough for 9a. Believe me, I don't want to offend anyone, but for me personally Pure Imagination felt even easier, although I know it's ideal for my body constitution and finger strength. There nothing but sharp incuts with jugs in between. Golden Ticket felt way harder. It's not the most obvious for an on-sight and it doesn't fit my style as much. But I climbed with a psyched and empty mind. I knew I already had some great ascents in the bag and there was nothing to lose. No space for fear or doubts... I simply kept climbing, fighting hard and somehow I made it to the chain of what might definitely be my hardest onsight to date.
We have 6 more days in the Red before returning to Europe. It would definitely be interesting to check out Jumbo Love, but I have planned my timetable for some unfinished business back there and this has priority."