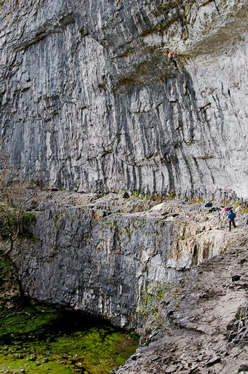 Young Adam Ondra is visiting Britain, in particular the climbs at Malham Cove and Kilnsey where he has climbed and attempted some of the hardest routes in the country established by Steve McClure.

Finally. It's taken a while for England's sport crags to be haunted by a continental climber - most are put off by the infamous British weather and the mouth-watering alternatives in France and Spain - but the day has finally come: Adam Ondra hit Britain last week. Undoubtedly one of the strongest and most talented climbers in the world, the Czech youngster took the bull by the horns and travelled north to Malham Cove and Kilnsey, climbing's equivalent of Wimbledon and Queens.

As usual Ondra had his sights immediately set on the testpieces and, in between working Steve McClure's 2007 9a+ Overshadow, he managed to on-sight three 8b's in a single day, Magnetic Fields, Totally Free and Austrian Oak. Other on-sights the previous day included Zoolook (8a) and Overnite Sensation (8a+), while Mark Leach's 1988 masterpiece Cry Freedom (8b+) resisted and will have to wait another day for an on-sight ascent.

Shortly afterwards Ondra then travelled to Kilnsey where on the North Buttress he redpointed Steve McClure's North Star (9a, 2008) in four attempts and the next day he redpointed McClure's Nothern Lights (9a, 2000) and on-sighted two 8b's, Full Tilt and Mandela. Impressive to say the least, but we're certain we'll be hearing more of him yet as Overshadow still has to fall and Ondra certainly doesn't like unfinished business.

Obviously the 17-year-old isn't the only foreigner to climb in Britain and plenty of reputable climbers have come and gone over the years, but in truth most have been attracted by the trad climbing in Wales and Cornwall or the gritstone delights in the Peak District. Few have sampled the limestone routes at Raven Tor, Malham Cove and Kilnsey to name but three, and while we're still waiting for a first foreign ascent of Ben Moon's milestone Hubble, Antonine Le Menestrel's famous solo of Revelations, the hardest route in Britain at the time, still remains one of the most inspiring ascents by a foreign climber in the UK. That was back in 1986, seven years before Adam was even born!