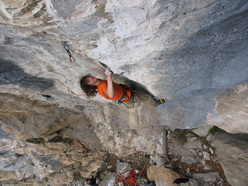 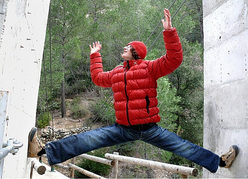 Adamo Ondra climbing an offwidth in Spain...
Photo by Ala Rozsypal, www.czechclimbing.com

Adam Ondra has returned to Italy and carried out the first ascent of "Vento nei Capelli" 8c+/9a at Cornalba and "La grande linea dei sogni"8c+/9a at Erto.

Adam has got the taste of it. A month after his pit stop at the Italian crags above Bergamo and Lecco which netted him the first ascents of a 8c+ and an 8c, Adam decided to return to northern Italy to test himself against the country's top routes and projects still awaiting their first ascent.

The result is such that we cannot even begin to create a definitive list of what Adam climbed. We've given up naming all his 8b's, 8b+s etc and we've decided to present this short summary of what we deem to be the most important.

Ondra's "Tour d'Italia" began two weeks ago in Cornalba once again where, in just 5 attempts, he freed an old 65m project, "Vento nei Capelli" 8c+/9a. Seeing that conditions for the other projects were not ideal, he travelled to Masone above Lecco and carried out the first ascent of the bouldery "Masoniamoci" 8c+/9a. Adam recounts "To warm down, I then made a very nice and technical 8b+ first ascent of "Baghdad Cafe", followed by an 8a+ and an 8a on-sight." The next day local climber Emanuele Maffeis pointed Ondra to a project high on the Passo delle Presolana called "Camoscio Emigrante". Young Adam didn't need asking twice and succeeded in freeing the project at 8b+ in the finest of styles: on-sight.

But that's not all. The young "raider" is back it Italy once again, more precisely at Erto where last Sunday he repeated, in a mere two go's La Linea dei Sogni., Luca Zardini's recent 8c+. Luca had revealed that one day we'd hear about the combination of two existing routes, his The Big MOther and La Linea. Well, that future is here today because on Sunday afternoon Ondra freed this linkup, grading "La grande linea dei sogni" 8c+/9a.

As we said at the start, there's much more to say and there will certainly be even more in the future. But we'll conclude here by saying that Adam, like many other top athletes, has added his name to the list of pre-registered climbers for the Melloblocco 2009. If you're looking for a good excuse to travel to Val di Mello, take our word for it that your personal fun and everyone's collective spectacle will be guaranteed!