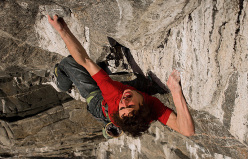 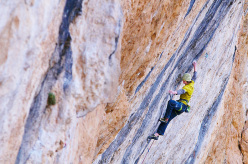 At Wielka Cima in Poland today the Czech climber Adam Ondra sent his 100th sport route graded 9a or harder.

One hundred 9a's. Better still, one hundred sport climbs graded 9a or harder. This, in short, is the incredible goal that has just been reached by Adam Ondra, the Czech climber who more than anyone else has overturned all of sport climbing's parameters. To be precise, Ondra has climbed 68 9a 20 9a+, 9 9b and 3 9b+...

To achieve this astounding result Ondra began early, at a mere 13 years of age when, back in 2006, he redpointed Martin Krpan at Misja Pec in Slovenia. In the 8 years that followed "Wonder Ondra" as he was often referred to at the time travelled across half the globe in his quest to understand the vertical past, present and future, climbing routes of all styles and angles, redpointing existing testpieces, freeing his own projects and even onsighting a couple of 9a's. A result that verges on being incomprehensible, and one that we will celebrate tomorrow in our in-depth interview.