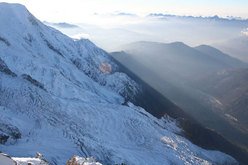 This September on the Bossons glacier at the foot of Mont Blanc a French climber has found precious gems, possibly the remains of an air crash.

This news slots into the strange-but-true category, is all about unbelievable luck and also... complete honesty.

Immagine walking, ice axe in hand, with your crampons and all the climbing gear necessary to deal with the Bossons glacier. And while working your way through the tormented Chamonix glacier that bars the ancient route up to Mont Blanc, you stumble across a little box stuck in the snow. Some might think this strange. Other though know that the perennially moving glaciers (unfortunately at present they are mostly withdrawing) swallow, digest and eventually spew out everything that falls onto them. So stumbling across something occurs every know and then, finding something isn't all too exceptional.

Alpinists know this all too well. And of course they know that usually they find pieces of old worn ropes, of rubbish and, worse still, the remains of mountaineers that the mountains restitute years and years later. What they don't know, because it's never happened before and probably no one ever imagined it possible, is that the box contained a small treasure of sapphires, rubies and various other gems. And this is exactly what happened to a young French climber who earlier this month, on the Bossons glacier, discovered the small metal box which contained bags full of... jewels.

Many newspapers have reported about this fortunate discovery and estimated the value to be somewhere in the region of several tens of thousands of Euros up to 200,000 Euros, depending on which source you read. And since the bags that contained the treasure were marked with the symbol "Made in India", the French Gendarmerie assumes that it may have fallen from the sky. Or rather, fallen onto Mont Blanc together with the two Air India planes that crashed onto this mountain, one on 3 November 1950, killing all its 59 passengers, and the other 24 January 1966 which resulted in 117 dead. In short, the box may be the remains of two authentic tragedies.

Clearly the mystery now revolves around whom this treasure originally belonged to. If, as many believe, the mystery remains unsolved then according to Agence France Presse the value of the jewels will be split equally between Chamonix (or the French state) and the young French alpinist who found them in the first place. Yes, because as no doubt you already know, the climber handed the booty to the local Gendarmerie... Chapeau, hats off to fortune but above all to his honesty!

On a final note - and just to stimulate some further research - Guinness world record. We are not aware of similar cases, or rather, of such "precious" finds at high altitude. But what happened is reminiscent of Jeff Long's Angels of Light. A (beautiful) novel that, between fiction and reality, recounts the race of climbers to recover the load stashed in a small plane that crashed high up in Yosemite Valley. Except that the treasure wasn't jewels but... marijuana.