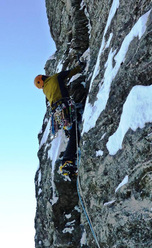 Guy Robertson at the start of the difficulties on the crucial third pitch of Mammoth (IX,9) on The Brack in Arrochar
Photo by Guy Robertson collection

With the British Isles gripped by cold weather, the winter climbing season in Scotland is now in full swing.

The big news to the start of the Scottish winter season is undoubtedly the first winter ascent of Mammoth (IX,9) on the Brack in Arrochar. This imposing four-pitch summer E3 was climbed on 7 December by Guy Robertson and Greg Boswell and the two strayed slightly off the original line on pitches 3 and 4 to follow a tufy crack, and believe "it’s probably the the best short, hard, accessible and well-protected route" they have climbed in Scotland.

The traditional breeding ground for winter routes, Glen Coe, has witnessed action as Donald King and Andy Nelson have carried out the first winter ascent of Satyr, a summer E1 5b on Stob Coire nan Lochan. After climbing the 100m route in two pushes, they returned on 7 December and set the record straight with a no falls, single day ascent and the route now settles in at IX,9.

On the repeat front, Cathedral X,11 on the Cobbler has received its second ascent by Andy Turner and Kev Shields. Turner had attempted Dave Macleod's 2004 testpiece a couple of years ago without success but on 5 December things ran smoothly.

Another outstanding repeat worth mentioning is that of The God Delusion on Giant's Wall of Beinn Bhan at Applecross. First climbed by Pete Benson and Guy Robertson in 2008, this route marked another step forward in Scottish winter climbing and the recent repeat by Martin Moran and Pete Macpherson shows how much standards have risen in recent years.

This is confirmed by one of Britain's foremost alpinists Ian Parnell who stated "It's been an incredible start this time and it's patently obvious that not just one or two individuals but collectively the whole British scene has raised it's game."