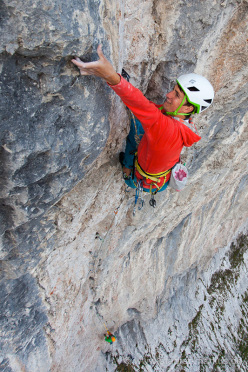 Roland Hemetzberger during the first free ascent of the Scheffler - Siegert route on, Wilder Kaiser, Austria 09/2013
Photo by Markus Stadler

On the Fleishbank sector of the Wilder Kaiser in Austria Roland Hemetzberger has made the first free ascent of Scheffler - Siegert route, established in 1960 by Peter Siegert and Wulf Scheffler and now freed with difficulties up to UIAA 10.

German climber Roland Hemetzberger continues with his mission of freeing aid routes on the Wilder Kaiser in Austria. After Karlspitze Südwand in October 2012 and Relikt Noichl Wörndl later that same month, Hemetzberger now checks in with what he himself describes as "a true highlight of my climbing career, something that will last forever", namely the first free ascent of the Scheffler - Siegert route up the steep Fleischbank face.

The 350m route was first climbed with difficulties up to VI-/A3 in 1960 by visiting German climbers Peter Siegert and Wulf Scheffler - the same two who three years later made the first ascent of the famous Superdirettissima up the North Face of Cima Grande di Lavaredo together with Reiner Kauschke. Hemetzberger first laid hands on the techno route this summer and immediately realised that the aid sections, despite being difficult, might go free nevertheless. To compound to the free climbing challenge though, Hemetzberger decided to use the original 1960's gear as much as possible and back this up with trad gear. A mere 3 new pegs were added to the belays.

"I didn't want to add many further pegs" explained Hemetzberger "and certainly no bolts at all, so the route became difficult psychologically, too. This old techo route climbs a direct line up a thin crack and is protected with plenty of pegs; while some are great, others are terrible, some are wooden and testament what was being used back in that era. We left it all as we found it and used nuts and friends to back up this in-situ pro."

Hemetzberger worked the lower third for three days and then went for the repoint at the start of September together with Fabian Hagenauer. "The first 100m are very steep and offer fairly exciting climbing with relatively poor gear and some pretty wild belays" Hemetzberger told Planetmountain. "You certainly shouldn't fall onto the belay, but this is pretty unlikely as the hard moves are always pretty far up the pitches." The second pitch is the crux, a 40m stamina outing with difficulties somewhere in the region of 8b, and on the first ascent Hemetzberger sent all the lower section first go, before swinging leads with Hagenauer and continuing up through "fairly classic alpine terrain, past corners and chimneys, sometimes wet and with difficulties up to UIAA VII".

"Being the first to free it is a dream come true, especially because there are no bolts at all! I'd like to think that my style of ascent should show that, with enough creativity, a project can last forever. I'd be really grateful therefore if no bolts were added to this route. We experienced a real adventure and it would be nice if others do, too! Many thanks to Fabian Hagenauer and Bene Hirschman for their support."