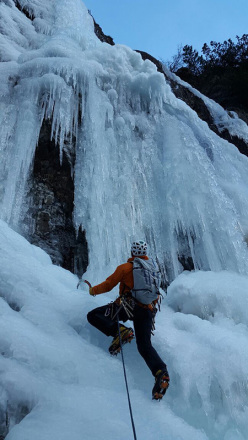 Cristian Candiotto, Riccardo Cup and Carlo Ravelli began the year in the best way possible with the first ascent of a new icefall in Valle di Trona, above Val Gerola in Northern Italy. The line is called Water Resistant, ascends 300m with difficulties in the region of II/4+, 5, before continuing for a further 200m through the steep forest to join the path that leads down to the Trona dam. According to Candiotto, this is an “icefall that, due to its formation and altitude of 1300m should be tackled with due respect."

Water Resistant joins other routes forged by Candiotto in recent years in the Trona valley, such as Crys, Mutual day and Couloir Del Caiman.