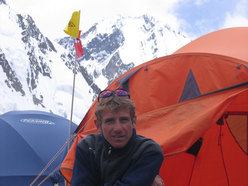 Walter Nones has died on Cho Oyu (8201m), the sixth highest mountain in the world. His death has been confirmed directly by the wife of the Italian alpinist.

"Walter had an accident this morning. We won't be able to embrace him any more, only remember him for the great, special man he was. At present there are no precise details about the  accident, so I would like to ask the media to treat this news with the respect it deserves." This is message that Manuela, the wife of Walter, posted on her husband's blog. A site which, at present, is off-line. The news was published by all press agencies and Italian news reports toady. At the moment we no nothing more than this. But this news, so hard and raw, is enough for all alpinists and all those who knew Nones.

Walter Nones had set off for the Himalaya together with Giovanni Macaluso and Manuel Nocker on 6 September with the aim of forging a new line up the SW Face of Cho Oyu. He should have returned home on 20 October. But this morning the accident occurred, after 2 different avalanches had hit Camp 3 on the Normal Route during the last two days. There were many alpinists in Cho Oyu Base Camp this seasons, many of which had already returned to Kathmandu, including the Italians Silvio Mondinella and Anna Torretta. At present this is all there is to go on.

Walter Nones was 39 years old and known above all, but not only, for the incredible odyssey two years ago on Nanga Parbat. As many will remember, together with the South Tyrolean Simon Kehrer, Nones had witnessed the tragic death of their climbing partner and leader Karl Unterkircher. The trio had been attempting a new line up the Rakhiot Face on the Naked Mountain, one of the wildest, largest and hardest mountains in the world. Nones and Kehrer found themselves in a dramatic situation, but the two managed to escape upwards (via a new route) and then descend. This was a huge undertaking.

Nones, born in Cavalese but a long-term resident in Val Gardena, was also known for his involvement with the Mountain Rescue team as a member of the Carabinieri Police Force. Nones carried this out with dedication and passion. Perhaps it was because of this that on K2 in 2004 together with Silvio Mondinelli he found the strength to help the Spanish alpinists who, descending, found themselves in difficulty. On that day he reached the summit along with Mondinelli, Unterkircher, Compagnoni and Giacomelli. And then he found the reserves to help the two alpinists in trouble. This was certainly neither easy nor taken for granted. Not much has ever been said about this episode, but when remembering Walter, one cannot forget this. Just like one cannot forget his endless desire to take to the mountains and his absolute passion for mountaineering.