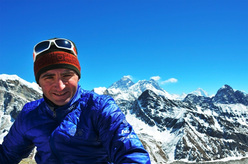 The Swissman Ueli Steck in the Himalaya
Photo by arch. Ueli Steck 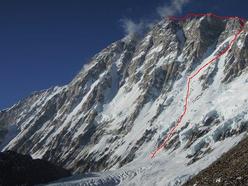 After a month acclimatising in the Khumbu region, Ueli Steck has kicked off his Himalayan season with a bang: in a mere 10.5 hours the Swissman climbed
Shisha Pangma, at 8027m the 14th highest mountain in the world.

At present there are few details to work on but one thing - seeing that it's Steck we're dealing with - is certain: the ascent was carried out extremely quickly. In fact, making the most of the weather window Steck set off from ABC at 5800m at 22:30 on Saturday at 22:30, and climbed the SW Face in 10. 5 hours. 20 hours after departure he was already back in Base Camp. The blitz climb was carried out alone, after his partner Don Bowie's wise forfeit since he did not feel perfectly acclimatised.

If a reference parameter is needed, then Steck climbed 212 vertical meters an hour. Compared to his other super record (2:4 for the Eiger, 2:21 for the Grandes Jorasses and 1:56 for the Matterhorn) this demonstrates clearly how important the altitude factor is in Himalayan climbs. Furthermore, to fully comprehend the performance, it'd be important to know whether the ascent was carried out via a new route... But even if it's up an existing route, Steck has certainly started his speed 8000ers in the best way possible.

This has been confirmed by Simone Moro (who initially planned to take part in this expedition) who told us: "It's amazing. Not only is this the fastest time up the South Face of Shisha, it's also the second fastest ascent of an 9000er after Denis Urubko on Gasherbrum II. Denis needed seven and a half hours to reach the summit and four hours for the descent, starting from 5900m, but one has to bear in mind that the route on G2 was equipped. While Ueli on Shisha probably didn't, and the south face is technically more demanding... It's clear also" added Moro" that if Ueli has climbed via a new route, then the undertaking becomes even more important."

Shisha Pangma is Steck's third 8000er, after Gasherbrum II in July 2009 and Makalu in September that same year. The alpinists have now time to celebrate: they're already focused on the next objective, Cho Oyu (8201m). Naturally to be climbed in Ueli Steck style, i.e. in record time.