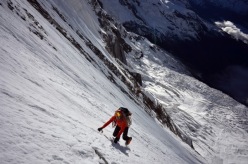 Yesterday Ueli Steck soloed the South Face of Annapurna (8091m) Nepal, Himalaya. Currently there are no further details, apart from the fact that the Swiss alpinist is already back in Base Camp.

"Summit, alone, South Face." The mountain is Annapurna. Its south face. The lone man on the summit is Ueli Steck. And this was the text message, sent from base camp around 22:00 last night (CET) by the Swiss alpinist. At present nothing else is known. There'll be time to find out more. To get all the details. The ascent times. The route line and all the rest.

But the lone summit is news in itself. To be able to say that Ueli succeeded in climbing the South Face, that he successfully reached the summit and also descended to Base Camp seems fantastic news in its own right, worth sharing immediately. Details will follow, of course and in due course. As well as the greater meaning of his ascent up a face which, for the Swissman, represents a "return" to the Himalaya after that incredible episode and brawl on Everest. What's more, this was Steck's third attempt up the face... this too is certainly part of the greater story.

What remains to be said, and underlined, is that in this era of "everything live, immediately" Ueli chose to communicate from Base Camp via this short SMS. At present there's no way of finding out more. We can only imagine. Paradoxically, it seems that one of the fastest climbers of all times has taken time out to think, to savour the afterglow, slowly... This too is part of Steck's style of experiencing the mountains.

>> READ THE INTERVIEW WITH UELI STECK>>