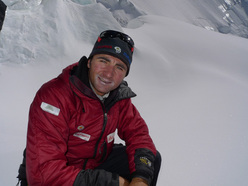 On 9 July Ueli Steck from Switzerland reached the main summit of Gasherbrum II (8035m) along the normal route.

Steck shared part of the ascent with his wife Nicole: after some acclimatising the two left Base Camp on 6 July and spent the night at Camp 1 located at 5900m. bad weather forced them to wait a day, after which they climbed up to Camp 2, needing 6 hours due to the precarious conditions where a few days earlier Steck had required a mere 2.5.

9 July was summit sprint day. Steck departed on his own at 00.30 and in less than optimal conditions (unstable snow, wind up to 50km/h and temperatures down to -25°C) he reached the summit at midday. After the obligatory photos he descend quickly to Camp 2 in 2.5 hours, and the next day returned to the safety of Base Camp.

Gasherbrum II is Steck's first 8000m peak and is also a good testing ground for his next project, Makalu this autumn. What is noteworthy is that less than a month ago the Swissman celebrated his wedding by climbing El Capitan in style, along the 41 pitch Huber creation "Golden Gate". Steck fell only once, while all the rest was climbed on-sight. From Yosemite to Makalu, what an experience. By the way, congratulations for the wedding :-)