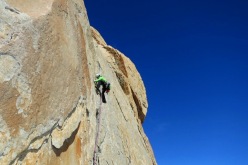 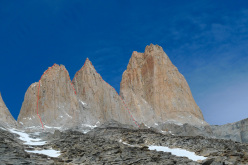 The news dates back to the first day of the year when Slovenia’s Andrej Grmovšek and Luka Krajnc forged a new route up the North Tower of the Torres del Paine in Patagonia. The new route climbs the large corner immediately to the left of Los esclavos del barometro and to the right of Armas y Rosas and joins both these lines two pitches below the north summit of the North Tower. From here Grmovsek and Krajnc abseiled to the col and climbed what they believe to be new terrain to reach the North Tower’s main summit. Their aim had been to traverse from here onto the Central Tower and South Tower but worsening conditions forced them to descend. The new route is called Zuko traverse and climbs difficulties up to V 5.10+, 650m. It is worth noting that prior to this climb the two had made an significant attempt on Riders on the Storm (1200 m, 7c, A2) which was stopped after 700m due to bad weather. While Grmovšek returned home after Zuko traverse, Krajnc travelled to the Fitz Roy massif where a few days later he made the first ascent of Real Kekec on Fitz Roy together with Tadej Krišel.

When we arrived at the Torres del Paine National Park in mid-December we were the only climbers in whole park! After Christmas a few climbers reached the park, but we were still less than 15 climbers. Which meant that the Paine walls were not crowded at all, certainly compared to the Fitz Roy massif!

We spent the last evening of the old year in a bivy just few hundred meters below the face and started climbing early in the morning of the first of January. Our idea was to traverse all three towers from north to south and we had originally thought about climbing the northerly most route on the North tower – Spirito libero - but it looked very icy so we decided for the line slightly further right (south) which looked quite dry. We didn’t come across any in-situ gear and when we later met Stevie Schneider (the local expert) he confirmed we had ascended a new line. The rock was mostly good, except for section on pitch three. We didn’t leave any gear in-situ (except for some some slings used to rappel off the north and main summit of the North Tower) and only used removable protection (no bolts/pitons). We spent 6 to 7 hours reaching the north summit, but then lost a lot of time on the rappels and the traverse to main summit and down to Col Bitch. There was a lot of fresh snow, we were totally wet (just in sneakers and with tiny gloves) and by now it was late in the day so we decided not to continue to the Central and South tower. Furthermore the weather forecast for next days wasn’t good.

This was my first trip to the Paine area, while a few years ago I climbed in the Fitz Roy massif. I always like to explore new places so I almost never return to the same place again!