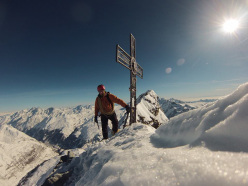 Tom Ballard on the summit of the Matterhorn on 10/02/2014 after having climbed the Schmidt route in 2 hours and 59 minutes.
Photo by Tom Ballard 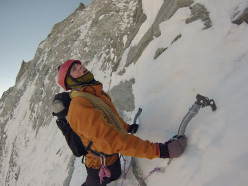 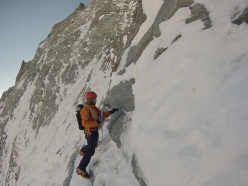 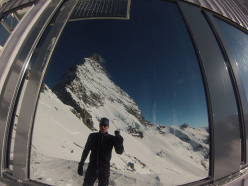 Tom Ballard below the Matterhorn
Photo by Tom Ballard

STARLIGHT AND STORM
THE ROUTES SO FAR

On 10 February 2015 British alpinist Tom Ballard climbed the Schmidt route up the North Face of the Matterhorn in 2 hours and 59 minutes. After Cima Grande di Lavaredo in the Dolomites and Pizzo Badile, this is another climb in his project Starlight and Storm that aims to climb the six great North Faces of the Alps in winter, alone and in just one season.

"Tom, you alright? How are things going?" We hadn’t heard from English alpinist Tom Ballard for a couple of weeks and were curious, and also somewhat suspicious by the long silence. For a couple of days we didn’t receive a reply... Then all of a sudden, last night, an answer: "I'm great thanks. Last night returned from the Matterhorn!" Oh yes! Tom was doing great, because for him returning from the Matterhorn (or, Cervino in Italian) means descending from another magnificent and historic North Face in the Alps, from another winter ascent and from another solo climb. It means, above all, another important experience. And it also means another piece in the Starlight and Storm jigsaw, his project to climb the six great north faces of the Alps alone and in the same winter. After the Comici – Dimai climb up Cima Grande di Lavaredo and the Cassin route up the NE Face of Pizzo Badile, Ballard has now climbed the North Face of the Matterhorn via the Schmidt route. A line first climbed by the Bavarians Toni and Franz Schmidt in 1931 and repeated by Ballard, alone and in winter, in just 2 hours 59 minutes. It’s worth pointing out that this was his first time on this route and on the Matterhorn itself. For the record, the first winter solo of the Schmidt route was carried out by Japan's Tsuneo Hasegawa on February 16, 1977, while on 13 January 2009 Swiss alpinist Ueli Steck (a Matterhorn specialist) soloed the route in winter in 1 hour and 56 minutes . But let’s hear what Ballard himself has to say about his latest adventure, before embarking on his journey again to climb the remaining three great North Faces in his winter “tour”: Grandes Jorasses, Petit Dru, Eiger ...


Tom, we know this was your first time ever on the Matterhorn. What does this mountain mean to you?
The Matterhorn is a mountain I have always dreamt of climbing. The Eiger is my favourite mountain, but this comes a close second! Of course it is also a part of my winter project, but is much more than just this for me. When I am out and about, I'm always looking up. The mountains call out my name, but which to choose? If you are in Zermatt or Cervinia the question is irrelevant: Matterhorn of course!

So how did you experience this peak before setting off?
The first glimpse was as we drove towards Cervinia, it took my breath away! This 'lump' is not as impressive from the Italian side, but still, wow! Maybe that's why the Swiss charge more! As we packed our rucksacks in the car park, the wind was really blowing. We were thinking, "going up there, with 90km wind. Is this wise?" Anyway, we rode up one of the few lifts that were open. Then we took our time with the final adjustments... we weren't so keen to go outside!

You chose to climb the Schmidt route
On the North Face this is the most logical route, the line of weakness. As you climb you just feel the way, the route naturally unfolds, leading upwards. I never really had to think about where I was going, the path lead me clearly towards the top.

Tell us about how it went. You were pretty quick, right?
As I was walking around to the foot of the face I was already feeling fatigued. Heavy footsteps. Craning my neck to catch a glimpse of the way. From below the wall is just too twisted to see where to go. Of course I had all the usual worries before an ascent. Fitness - maybe still tired from yesterday? Weather - not a cloud in the sky, but what about the wind? Conditions - good, bad or adequate? Only one way to find out! But when I crossed the Bergshrund, all my worries were pushed to the back of my mind. It was like I had been fired from a cannon, whoosh, I was off! Up, up and away... Whilst I made what were probably the hardest moves of the route, spanning from one piece of ice to the next, in an unbelievable position, 800 metres of air beneath my feet, a helicopter hovered very close, I could feel the rotor wash. And the noise was deafening, fortunately drowning out my stream of profanities! Yes I was quite fast. 2 hours and 59 minutes! Hahaha. That's including stopping for 5 minutes to take 'selfies'!

What gear did you have?
I wore a harness (that reminds me, it needs replacing!), with some 'tat' to leave behind if necessary. A thin 50m rope (needs replacing, too!) And a belay device, ice axes and crampons. In my backpack I had spare gloves, warm clothes, a headtorch and half a litre of tea which I gulped down thirstily at the top.

You mentioned the conditions: what sort of a winter ascent was it?
On the face there wasn't much snow, the wind took care of that. All the snow is somewhere in France! The conditions were quite thin I guess. I have never been up there before so I wouldn't really know. It was pretty cold, if I had stopped I would have got cold very quickly. Alas, no time to rest.

How difficult did it feel?
Compared to the Badile and Tre Cime? For me so much easier. I love to climb like this, axe and crampons, no ropes, no faff. Just climb. In terms of difficulty, in the region of M4+/5.

What was the unmissable thing about this ascent, what satisfied you most?
The crisp coldness. The satisfying 'squeak' of metal penetrating neve.

Help us comprehend your idea of risk. What’s your attitude towards risk when you climb alone?
It doesn't matter if you are 10m above the 'deck' or a 1000. The result of a mistake or bad luck would be the same. Climbing is like rugby, you have to put your body on the line. It's all or nothing. Through the greatest risks come the greatest rewards. All there is between me and the abyss are four metal points!

In those 3 hours, did you only think about the climbing or did you manage to think of something else?
No, only about the climb, getting to the top. I was encased in a bubble. Just me and the mountain, on intimate terms.

On the North Face you were alone, before and afterwards though you were with friends. Tell us about this logistical support?
I was accompanied by two friends (not on the North Face). Ruggero who drove us, he was there to document the ascent. And Mario, who looked after Rugg and carried all the food! The first day we set off at 6 am from Pera di Fassa, destination Cervinia. In the afternoon we battled against the winds and crossed the Theodul pass. Hannibal had nothing on us three! We were all tired, it was cold and windy and we bivied at the foot of the East face. The next morning we ascended up to the Hörnli ridge. I climbed up to the Solvay Hut, and up above. But the wind was just too strong and I needed to conserve energy for the main objective. Still, it would have been cool to climb the Matterhorn twice in two days! So I descended to my tent and drink, eat and get warm in my sleeping bag. In the meantime Ruggero and Mario were battling against the wind and encroaching darkness and later on they finally made the relative safety of the Solvay hut. I slept on...
I left my tent a little after 7 am and was on the summit at 11am! I descended the ridge to the Solvay hut, where I was reunited with the 'boys' and much-needed food and drink! We combined ropes and descended together, bivied again at the foot of the East Face. The next morning we headed over to the ski slopes and civilisation, took the cable car up to the Kleine Matterhorn. Given the price of the tickets I expected them to be goldplated, or at least get a free breakfast! Then we enjoyed a wonderful ski down to Cervinia. Huges smiles all round. A fantastic end to a great mini adventure! Solo climbing is a team effort!

What does thinking about an ascent - before, during and after - mean to you?
Before: nothing but worries. Anxiety rules the day. After: worrying about the next!

So three down, three to go… How are you experiencing these days
I live each day as it comes.The weather dictates what I do. Not the other way around. I am completely in Mother Nature's hands, will she be nice? And the glass: is it half empty, or half full?

21/01/2015 - Tom Ballard, Cima Grande di Lavaredo and Pizzo Badile in winter for his Starlight and Storm project
British mountaineer Tom Ballard, as part of his project Starlight and Storm to climb the six great North Faces of the Alps in winter, has recently climbed the Comici - Dimai route on Cima Grande di Lavaredo in the Dolomites and the Cassin route up the NE Face of Pizzo Badile.