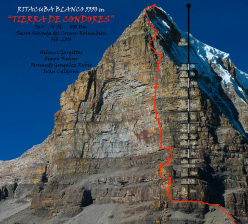 Tierra de Condores, the route up Ritacuba Blanco in Columbia

In February 2010 Helmut Gargitter, Simon Kehrer, Gonzalez Rubio and Ivan Calderon made the first ascent of Tierra de Condors (7a+, 800m), a new route up Ritacuba Blanco (5350m) in Colombia.

Tierra de Condors was in fact established in February 2010 in a little-known but extremely beautiful and spectacular area in the Cordillera del Cocuy in Colombia. Little has been published previously about our climb as we have little spare time and we prefer to spend this climbing ;-)

In February 2010 Simon Kehrer (Italy), Fernando Gonzalez Rubio (Columbia), Ivan Calderon (Venezuela) and I established Tierra de Condors (800m, 7a+) up the East Face of the Ritacuba Blanco (5350m) during seven days of excellent weather, with six bivouacs on the wall.

We used some bolts at the belays and trad gear along the pitches. The first 14 pitches (500m) breach very overhanging terrain up good "alpine" rock. The final 300m climb mixed terrain and steeper rock. The very hard sandstone resembles granite and due to melting ice the rock on the upper section is very loose. The route has already been repeated once fully, while the lower section has been repeated, too. Both repeats have confirmed the difficulties.

There are three other routes on this face, climbed more than 13 years ago: one on the far left put up by Fernando Gonzalez Rubio and friends and another one on the far right, soloed by Swiss mountaineer Daniel Anker up mixed terrain. The third is the Lopez - Paff Pillar climbed in 2012 by Camilo Lopez and Anna Pfaff; this ends after 600m below a serac at 5179m.