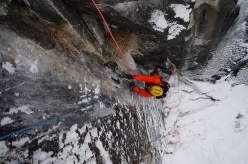 Max Sparber climbing pitch 3 of No Country for Old Men at Rein in Taufers, Italy
Photo by archive Thomas Bubendorfer 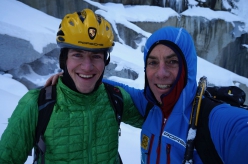 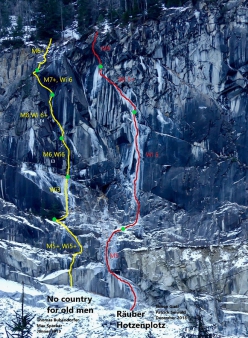 Austrian alpinists Thomas Bubendorfer and Max Sparber have made the first ascent of No Country for Old Men, a challenging mixed climb close to Sand in Taufers in the South Tyrol, Italy.

"I saw the line while we were repeating Räuber Hotzenplotz and said to myself I simply had to return to climb it." At the start of January expert Austrian alpinist Thomas Bubendorfer teamed up with young Max Sparber to make the first repeat of Räuber Hotzenplotz, mixed outing close to Sand in Taufers in the South Tyrol, and it was from one of the belays that Bubendorfer noticed an enticing line immediately to the left.

After a short break the two returned to Italy and established the line ground-up over three days. "Conditions were very good, not too cold for new routing, only about -2°C, but we were in no rush and started late on the first day, and were then slowed down on the next two days by the difficulties and by poor weather" Bubendorfer told planetmountain.com.

All pegs used were left in-situ, and bolts were placed on some pitches where the protection was otherwise simply too poor. "There are some sections where the ice was really thin, where it went from 6 cm down to 2 cm, past some hard moves where the rock didn’t accept any pegs. Continuing on, taking on a huge risk of getting hurt, would have made no sense at all so we placed some bolts."

planetmountain.com asked Bubendorfer whether his approach to ice climbing and new routing has changed since his dramatic accident in the Dolomites in March 2017, and the 55-year-old replied "No, I’ve always erred on the safe side and placed bolts if I’ve felt the risk is unacceptable. There’s just no point."

The new route has been called No Country for Old Men after one of Bubendorfer’s favourite novelists Cormac McCarthy. But also because when dealing with the tricky dry tooling sections, he told his climbing partner that it was "no place for old men." To which Sparber replied that, conversely, the ice was "no place for young men." The new route checks in at WI6, M8(+?) and since the first ascent the cold snap has helped the sliver of ice on pitch 4 to grow considerably, meaning that the crux may now be slightly easier.

TOPO: No Country for Old Men, Rein in Taufers

09.05.2018
Thomas Bubendorfer climbs new route up Großglockner after Dolomites accident
13 months after his life-threatening accident at Sottoguda in the Dolomites, Austrian mountaineer Thomas Bubendorfer has established a new mixed climb up on the South Face of Grossglockner (3798 m) in Austria. The new route is called Das dritte Leben, The Third life, and Bubendorfer established the line with Max Sparber and Hans Zlöbl.