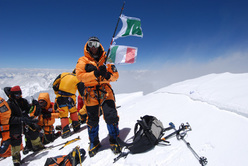 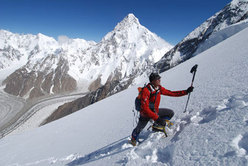 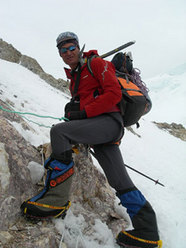 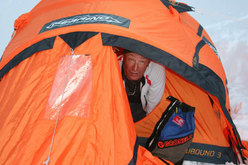 The day after: Silvio Mondinelli, Broad Peak and all 14 8000m summits

13/07 interview with Silvio Mondinelli after the summit of his 14th 8000m peak without supplementary oxygen.

How does one feel after having completed all fourteen 8000m peaks? This is a rhetorical question when talking about Silvio Mondinelli and a passion which will hardly be subdued after having reached this important goal. We’ve just spoken to Silvio Mondinelli at Broad Peak Base Camp via satellite phone. And we discovered the same reserved and sincere mountaineer as always, as if the fourteen 8000m peaks mean nothing at all. Or better, that reaching this goal has by no means dented his passion and his desire to look beyond simple appearances.

Silvio, Broad Peak is in the bag as well. How did it go?
Well, in the end well… we’re all fine.

Difficulties?
There was lot’s of snow before the col. We sunk in up to our knees and we had to break trail. That was hard, even if Broad Peak isn’t technically very difficult. Ivan Vallejo was excellent… I even had a small crisis during the final section before the col and at one point I told him that I was sorry that I was unable to help…

How did he reply?
That I had broken more than enough trail...

Then, after the pre summit, there’s the long traverse to Broad Peak’s “true” summit?
Yes, but in truth I didn’t find this too difficult. I think this is because as you climb you constantly look at K2. It amazed me how this mountain attracted my thoughts. In some way K2 distracted me, and perhaps it’s because of this that the traverse up to the summit and back down again went so quickly. And the winds didn’t really affect me much either (editor’s note: the winds were gale force, as they can be only on 8000m peaks). Apart from this I have to say that 50 years ago Kurt Diemberger was really impressive to return to the summit together with Hermann Buhl...

Lots of you attempted the summit yesterday...
Yes, the first section looked like the queue up to Capanna Margherita on Monte Rosa; a frightening number of mountaineers. But we then separated and distanced ourselves.

It was the summit of your 14th 8000m peak. How did you feel?
It was strange, on the summit I didn’t feel the satisfaction I usually feel… This surprised me. I was overcome by a sort of sadness: I thought about all my friends I’ve lost on these mountains, I thought about Christian Kuntner. The others celebrated me when I reached the summit: Marco Confortola, Angelo Giovannetti, Fabio Iacchini, Edurne Pasaban, Gerlinde Kaltenbrunner, Ivan Vallejo and Ralf Dujmovits, but I was a bit absent. On the other hand this is our profession and our passion…

But surely you’re happy to have completed this “round”?
I have to say that those who talk numbers really make me laugh. It’s certainly satisfying to have finished, to have climbed them all… I was really touched by the necklace which the hunza gave me to celebrate the summit.

But...
It all seems so tranquil, I imagined it to be completely different. I had prepared 4 beers in Base Camp but they’re still there… Obviously I’m pleased, but at the moment I can’t settle down to think and I can’t really see myself going around and “show off” my fourteen 8000ers. I’ve reached a goal, but I still want to continue and do other things.

For example?
Perhaps climb some new routes, we’ll see. I’d like to do something different… But don’t make me argue with my wife immediately.

Speak to you when you get back Silvio, congratulations!
Thanks, a big hug to all!