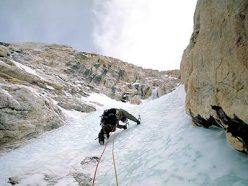 Willie Benegas climbing through the Snake
Photo by Damian Benegas 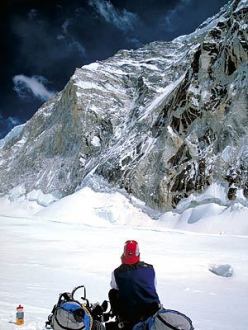 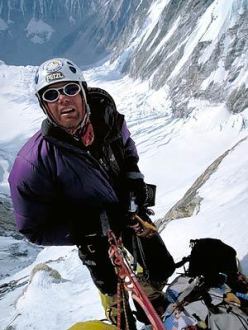 Damian Benegas checking out the route.
Photo by Willie Benegas 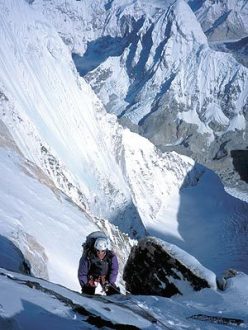 The Benegas brothers are members of the Team The North Face

The Crystal Snake of Nuptse

In spring 2003 Damian Benegas and Willie Benegas made the first ascent of The Crystal Snake 5.9 M4 WI5 up the North Face of Nuptse, 7855m, close to Everest.

This spring, with the world's attention on Everest and its 50 year celebration, the Patagonian twins Damian and Willie Benegas pulled off a daring alpine style ascent of nearby Nuptse. As members of the "American 2003 Nuptse Expedition", the two Mountain Guides forged an imposing new route up the North Face, calling it The Crystal Snake, 5.9 M4 WI5. Their raw account, published below, highlights the difficulties and rewards of Himalayan climbing, but also serves as a poignant reminder of the fragility of life.

"In May 2003, two different worlds collided at Everest BC. On the one hand, the full-scale Everest expeditions and, on the other, ours: super-light, alpine, just us twins, no tents, no shovels, two backpacks, a light alpine rack, food for 4 days and, of course, the pee bottle. And to add to it all, a pre-monsoon season that shut down Himalayan veterans Valery Babanov and Hans Kammerlander on Nuptse’s south buttress on their second attempt! But Willie and I triumphed. We took advantage of three years’ worth of reconnaissance from Everest’s South Col to piece together a route that started above the Valley of Silence, or Western Cwm, and continued up the North Face to the summit at 7855m.

After acclimatising up to Camp III at 7400 meters on Lhotse’s West Face, we waited two and a half weeks for better conditions. On May 15 we departed from Camp II at 6350 meters in the Western Cwm to our Nuptse tent below Nuptse’s north rib. From here we climbed ten pitches of mixed ice and rock up a killer line on the triangular face visible to everyone from Everest BC, or even better, who enters the Khumbu Icefall. We spent the night hanging in harnesses; at 2 a.m. Willie woke up shouting — what’s the problem? The stove broke! Nothing to do but go down; we rappelled and returned to Camp II, but not before black mailing ourselves by leaving our backpacks on top of our last pitch. This way yes or yes we'll need to return and get our bags and, once there, they'll be nothing to do but finish the climb! Also we left our 2 ropes fixed on the first two pitches.

On May 18 we moved up again, taking three and a half day’s food and a small alpine rack; pins, stoppers, cams and 10 ice screws. After ascending the two fixed ropes, we started re-leading all those hard ice pitches to our backpacks. It snowed the first afternoon, a model that continued throughout our climb; the near-constant spindrift that plagued our ascent limited the climbing to only four and half hours a day. We made our first bivouac at 6500 meters and the second bivy at 6700 meters, at this point our sleeping bags were a block of ice. Note to ourselves! Next time bring a shovel and a snorkel so as to breathe from inside the sleeping bag and not leave a hole for the snow to get in! Three more bivys, at 6950, 7100 and 7400 meters, took us to the top of the "Crystal Snake of Nuptse"

May 22 was our worst day: it snowed all day and night. Twenty four hours of constant spindrift. As in any bivy, someone always gets the worst spot, and in this case it was me. Because of the constant spindrift I had to clear off fresh snow every fifteen minutes, so I stayed awake all night while Willie slept.

May 23 we woke up very early and started climbing in to a very bad day of high winds and constant spindrift. A few hours into the day and we were ready to give up, but at the top of ridge, at approx 7550/7600 meters, we could see that from here the climbing difficulties eased off.

And so, after 6 days of constant battle with us (spindrifts, wind, snow and hard climbing) the snake had given up and granted permission for us to step onto the summit. The wind and clouds cleared, and it became so warm that we took off our down jackets. Willie reached the summit around 13:00 and I 20 minutes later. As in any mountain the summit is only the half trip, and we needed to get down. We started rappeling down the 1979 route directly to Camp II, where we arrived at 10 p.m. and where the Alpine Ascents crew was waiting for us with some warm food. The Crystal Snake (5.9 M4 WI5) as we called it involved forty-two pitches and much soloing, five bivies, daily snowfall, constant spindrift, and a set of twins.

Without all of the support from everyone, the realisation of this dream would have been unobtainable. Thanks so much to The North Face, Petzl America, La Sportiva, M.S.R., Sterling Ropes and Cliff Bar. And I don’t want to forget about all of the help from Jenny.

Someone said to us that climbing this route must have to be one of the most difficult things we have ever done in our lives. My response to that is that it was not the climb that was of the most difficult, but instead what happened to us after of our summit. Just after summiting, we spent the next 24 hours trying to save the life of Sherpa Karma. We asked desperately for help through the radio both up the mountain and down to base camp, and hardly received any encouraging answers. After 10 hours of continuous effort, he sadly passed away at the beginning of the Icefall at 19,000 feet. "The Gods of the mountains follow him in his journey to the afterlife".

And to add to this experience, just a couple of days after this misfortune, a big M17 helicopter with 8 members crashed into Everest Base Camp. Again we found ourselves desperately trying to save the life of people. Yes, my friend, what was hard for us was not the climb. It was the continuous effort to save the life of human beings, and not being able to achieve it."