► News ► Alpinism ► The Bird, a pearl of the Dolomites by Giovanni Groaz, Massimo Faletti
Versione italiana 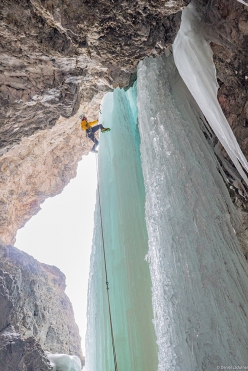 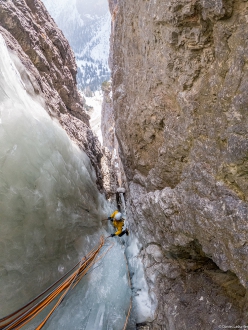 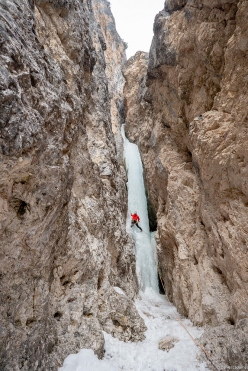 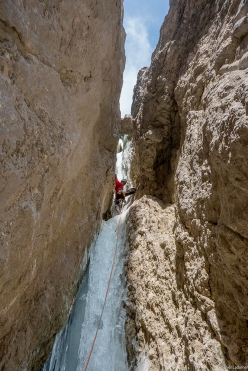 PORTFOLIO / gallery Portfolio: The Bird, a pearl of the Dolomites by Giovanni Groaz, Massimo Faletti

The Bird, a pearl of the Dolomites by Giovanni Groaz, Massimo Faletti

Daniel Ladurner introduces 'The Bird', a rarely repeated mixed climb in Langental / Vallunga, first ascended by Massimo Faletti and Giovanni Groaz in 2003. Initially called Gola del Pettirosso, this 'pearl of the Dolomites' was renamed by the first ascensionists in honour of Jim Bridwell.

After some repeats in recent years, notably in 2015, 2017, 2020 and 2022 and after having climbed the route with different quantities and qualities of ice, I believe I can safely describe this as as one of the most beautiful, moderate mixed climbs in this part of the Dolomites. Established on 25 February 2003 by Massimo Faletti and Giovanni Groaz and initally called Gola del Pettirosso, it was re-equipped in 2020 by Mauro Mabboni and Diego Dellai and renamed The Bird in honour of their friend Jim Bridwell who passed away in 2018.

The route is located about 150-200m before Flauto Magico, set in a deep, narrow gorge. The line starts up a 40-meter corner, climbed either by bridging delicately or jamming. There are some pegs ins-situ, however a selection of cams will be found useful here. After the first belay, equipped with new bolts in the niche on the right after the chimney, the next pitch transforms into a pure ice line in good conditions. When there is little ice however, this presents itself in the form of thin hanging daggers; climb past these to a difficult and narrow chimney at the top. This year, for example, there wads a huge icefall here and consequently easy to climb. Yet another example of how subjective grades can be in ice climbing ...

The third pitch follows a narrow icy chimney with wedged boulder; the ice improves the higher you get. The belay is located after 50 meters in a niche on the right.

The fourth pitch, on easy ice and in the sun, is a pleasure to climb and leads to a large ledge and a huge tree, from which it is possible to abseil

In my opinion, this route mistakenly sees far too little traffic and it's a real pearl of the Dolomites.

Updated topo on the website of Massimo Faletti: www.mountainguidesdolomites.com

19.02.2018
Jim Bridwell, at the forefront of climbing and alpinism since the 60's
The 2002 interview / portrait of American climber and mountaineer Jim Bridwell, one of the undisputed driving forces of rock climbing in Yosemite and on the world’s most inhospitable mountains, who died on 16 February 2018 at the age of 73. By Vinicio Stefanello.

17.02.2018
Jim Bridwell, goodbye to legendary rock climber The Bird
Jim Bridwell has left us. Yesterday, February 16th 2018, one of the absolute legends of rock climbing and mountaineering, died aged 73.