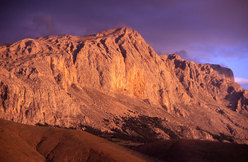 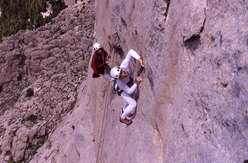 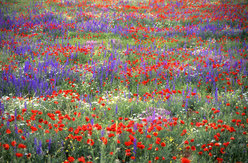 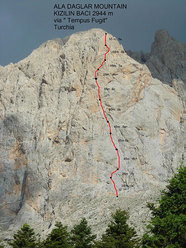 From 2 - 17 June Mauro Florit, Marco Sterni, Umberto Iavazzo and Massimo Sacchi made the first ascent of "Tempus fugit" 7b 700m on the S Face of Kizilin Baci 2944m, Turkey.

From 2 - 17 June Mauro Florit and Marco Sterni returned to Turkey (see news 2006) to the Ala Daglar massif where, together with Umberto Iavazzo and Massimo Sacchi they made the first ascent of "Tempus fugit" 7b 700m on the S Face of Kizilin Baci 2944m.

The four climbers returned home with memories not of the arduous walk-in, the long run-outs, the crux pitches... no, they remember above all the explosion of flowers and scents which had them literally transfixed. Here is what they had to say:


Turkey and her flowers by Marco Sterni and Umberto Iavazzo
"Turkey, Ala Daglar, a new 700 m route… Why talk about the preparations, the grade, the ethics or other details of the ascent when colous and scents captured and filled our minds?

The choice of returning to Ala Daglar at the start of June instead of August outlived all our expectations. If on the one hand we had to carefully watch the weather and risk massive rain showers (with obvious repercussion on our mood and the outcome of our project), then on other hand we were greeted by the unexpected beauty of nature in late spring which filled our minds and marked our stay so much that we’re forced to describe it.

Umberto Iavazzo recounts and takes the occasion to lay bare our characters which, for good or bad, are certainly marked by the passion which binds us to the mountains and nature."
Marco Sterni

"I look around and can't believe my eyes: an over-abundance of colours, a true explosion of nature's aesthetic power. Flowers, yes, millions of flowers in fabulously complementary hues as far as the eye can see, mixed as if by chance in an abstract painting.

For days there have been plenty of beautiful flowers on the rock face. My companions, those who possessed "technology" search for the shot of the century while I, free from such duties, immerge myself into this spectacle and the thoughts which only flowers can provoke. When we're on the wall the alleviate a bit the solitude of a ledge or they sometimes indicated the right direction at a critical moment.

The gentian with its large blue grey funnel shouts out its advice while the numerous small saxifrage whisper in unison to watch out. The rampions, bloated with air and beauty resemble those pompous, motley coloured climbers, almost like those local Turkish climbers we had just met.

Thousands of poppies sway lazily on the fields below, lanky hippies at a concert, vivid-coloured and a bit out of it. The sea of thick milfoil acts as a backdrop to numerous other flower species, more or less known and typical of these lands. I am faced by a gigantic Monet painting and I think how much these flowers can resemble us humans.

Walking lazily, oppressed by a rucksack which is much heavier than my desire to work hard, I compare us four humans to the flowers who watch our approach every day to the rock face.: we're not florists, but climbers. The mossy and thorny shrubs which force us to healthy deviations remind me of Marco's Spartan nature. Max definitely resembles a cowslip which juts colourfully out from some crack in the wall, where his fuchsia blue coloured petals cannot go unnoticed against the stark yellow wall, alone and timid just like him.

Mauro in the other hand reminds me of rosehip, a bit thorny but not too much, a scrambler, with flowers dotted here and there in the bush, with some fruits which by chance cure his little health problems! Dulcis in fundo I compare myself to mountain pine trees, and here we came across numerous different species, because like pine I grasp the rock face with great disregard for a possible fall.
So that, I think to myself, is all four of us sorted, when... tic...toc... TLUF! Rain. Rain? No way! We're in Turkey, land of the sun, and yet... it's almost as if I can hear them laughing for joy (and to mock us). Yes, them, the flowers, for this unexpected present for the skies thanks to that "bad luck" which follows us. TLUF… TLUF! Let it rain."
Umberto Iavazzo