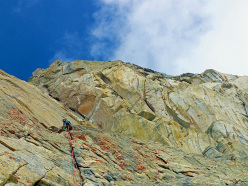 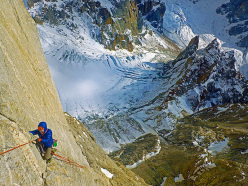 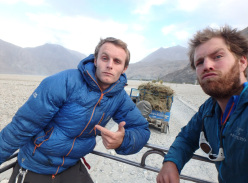 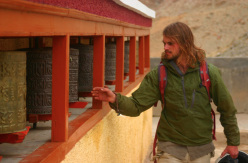 James Monypenny reports about the attempt, carried out together with Max Fisher to climb Tangra Tower (5,620m) situated in Khane Valley in Pakistan's Karakoram in memory of Cory Hall.

Last year when my good buddy, climbing partner and fellow adventurer "thee Cory Hall" passed away in a tragic climbing accident whilst on a motorbike-Pan-American climbing odyssey, I knew a memorial expedition with friend (and also Cory-partner) Max "the bear" Fisher was in order. Cory was, and still is, an inspiration to many, not only in his impressive climbing career, but also in his carefree, fun loving and adventurous life style.

The granite spires of Pakistan have been a long held dream for Cory and myself: and I wanted to forge an uncompromising line, in good style, up a remote, untouched spire, in a rarely visited valley. Tangra tower fit the bill perfectly. After months of research, fundraising and preparation; the stage was set for a true adventure.

Early in September we met in the chaos and humidity of Delhi, bought Royal Enfield motorbikes and learnt to ride in the deep end. After three days of dodging traffic and cows through the foothills of the Himalaya we reached the Pakistan-India boarder. Try as we might, we were unable to bribe the bikes into Pakistan and continued by public transport, up the infamous Karakoram highway.

In Skardu we bought supplies for a one month stay in the Khane valley. Entering the valley the psych was running high, surrounded by alpine & big wall objectives, with so much to choose from. However fate had other plans. After a reccy on our first day, we spent the next 9 days pinned at base camp whilst around a foot of snow fell and I suffered badly with Gardia.

On day 10, only partly recovered, we moved our heavy big-wall kit into the base of Tangra, however we were going to need a lot more sun to melt all the fresh powder on the lower slabs. Instead, we opted to acclimatize on the alpine-style objective of "Twin peak 2". The endless trail breaking through knee-deep snow finally gave way to some great ice climbing. Taking the short-cut straight up seracs yielded good ice and less slog. A huge spindrift avalanche ripping down the tasty-looking chimney we were aiming for meant we had re-think, and romped-up an alternative couloir. We were initially slowed by powder snow sat on brittle ice and loose rock slow, then after a few hundred meters we rejoined our line and were rewarded by 400 meters of excellent ice conditions.

In hindsight, after moving together for so long, and Max mentioning his fatigue, it was unwise not to take a break and refuel at this point. Pushing onward, we reached around 150m from the summit. However Max was done, unused to the altitude and unacclimatized, a deep fatigue had set in. Our rap down through the night went reasonably well, and we stumbled back to our advanced camp after 20 hours on the go.

The following day high pressure arrived, and we enjoyed blue skies on the painful stumble back to base camp. Just as good weather arrived, Max’s psych departed. Unfortunately the waiting game had taken its toll, thankfully he was willing to give Tangra an attempt.

After only one full day at BC we returned to Tangra, collected water, and got established on the wall. I led up the lower slabs. Dirty, gritty, rounded cracks would finish abruptly, and I would continue into the unknown: hopeful. Friction combined with 30kg of water did not make hauling any fun, not that it ever is. Camp 2, in our orange ledge, produced almighty views, the rising and setting sun helped to re-warm Max’s psych, just a little. And he got stuck into some slow going awkward aid on pitch 1 of day 2. Several pitches later snow flurries and unprotected moves halted my upward progress and we set up camp in an awesome position.

Linking the grey bands on the morning of day 4 we reached the upper headwall. Wild splitter cracks, which took a mixture of free, aid and pendulums to proceed, led us to the chimney pillar, where we spent the night. After an hour of trying to get the stove going, using cheap Asian lighters, we succumbed to a depressing meal of dry noodles. Searching every pocket I found three matches, and we could continue to eat and melt snow for one more night, however lack of gas forced us to make a summit attempt on day 5. This did not go well. After taking two hours to achieve twenty meters, due to horrendous off-width climbing, loose rock, and tricky aid, I had to admit defeat. Despite the tips of my fingers being painfully split, my body tired, my motivation to keep going upwards was high, but this didn’t change the fact we were out of water and gas. Going down was the only logical choice.

We managed to get down leaving behind mainly just tat around spikes. This time, having done the majority of the leading, it was my turn to feel the deep fatigue. Stumbling, for the last time, back to base camp, the weather remained mockingly good.

Tangra put up a great fight. It’s the unknown that beckons us back to the alpine, time after time. In this case there was no certainty of success, so many challenges to overcome. Whilst we didn’t overcome them all, and we didn’t stand on a summit, the trip was a success, because coming home to friends and family is the most important objective. Tangra will still be there, and I will be back. To my friends and family: thank you for your support, & sorry for the worry that my self-indulgent sport inevitably causes.

We would also like to thank Mountain Equipment (for supplying clothing), Lowa (for supplying footwear), Mountain equipment coop Canada (for supplying the portaledge and haul bag), V12 outdoors (various items of equipment), as well as the British Mountaineering Council, the Mount Everest Foundation, & Gore-tex for supporting the expedition financially