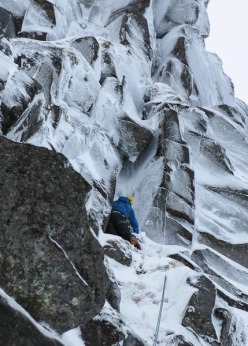 Despite it being a particularly windy winter up in Scotland, between the storms a handful of significant ascents have been carried out. As previously reported Ben Nevis was the scene of the first major route at the end November with the first ascent of Tomahawk Crack at the hands of Greg Boswell and Adam Russell, but it is the wild Beinn Eighe located in the Torridon area of NW Scotland that has seen some of the most impressive action with the first ascents of Shooting the Breeze (IX,8) and Immortal Memory (IX,9). Both routes were put up by Guy Robertson and while the former climbs the West Central Wall following the summer line of Shoot the Breeze, the latter is a winter-only line on the Far East Wall. Robertson teamed up with Greg Boswell for Shooting the Breeze on 15 January and with Jason Currie for Immortal Memory on 26 January, and after this ascent he exclaimed "To climb a completely new winter-only line up the middle of Far East Wall – for me this was hitherto the stuff of fantasy".

It is worth noting that at the end of December the formidable Robertson - Boswell partnership added a major new line to Creag an Dubh Loch, Vapourizer (VIII,8) a stunning five-pitch icy mixed line which Robertson, reporting on Simon Richardson's excellent www.scottishwinter.com, described as "undoubtedly one of the best icy mixed routes in Scotland. The climbing was an exquisite combination of thin ice and steep rock, with a distinctly cerebral element throughout – there simply are not enough adjectives to describe how good this route is – the exposure on the top pitch was quite ludicrous!"

Richardson himself teamed up with Iain Small for the first ascent of No Success Like Failure on Ben Nevis. This was Small's second visit to the series of grooves up the buttress to the left of Rogue’s Rib after Blair Fyffe after a first attempt earlier this season was cut short after three sustained pitches by a developing blizzard and lack of daylight. The entire line, described as "a truly magnificent winter route" now goes free at a very scary IX,8.

Other routes of note are the first ascent of the 4-pitch Suspended Animation (VIII,9) by Martin Moran and Pete Maccpherson on 16 January up the Suspense Wall on Beinn Bhan and the first winter ascents of the summer climbs Jib (VIII,8 Simon Richardson, Iain Small 19/01/2013) on Blaven and Engineer's Crack (VIII,8, Donald King, Mike Pescod 25/01/2013) on Buachaille Etive Mor. On the repeat front, Steeple (IX,9) and The Cathedral (X,11) saw third ascents from Moran-Macpherson and Boswell respectively.