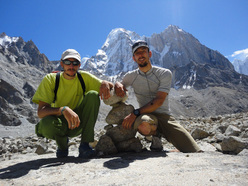 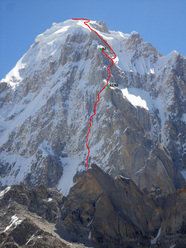 Talk about Himalayan baptism of fire:  at the beginning of September a small team of young Slovenian  alpinists led by Urban Novak travelled to the Charakusa valley where they carried out a series of climbs including an impressive, fast ascent of K7 via a massive 1600m high line.

The direct new route is called Sanjači zlatih jam and was was climbed alpine style by 22-year-old Luka Stražar and 26-year-old Nejc Marčič from 6 - 9 September past difficulties estimated at VI/5, M5, A2, 1600m.

After the ascent Luka stated "We climbed the route in 4 days. The lower part was mainly ice and upper part was mainly rocky passes and mixed climbing. We tried to climb on the ridge as much as possible  because of the presence of overhanging seracs. We started from the base at 3 a.m., which was followed by 2 hours approach over scree, followed by climbing snow and ice until the first bivy on the ridge at 7:30 p.m. The next day was technically the most demanding and consisted mainly in mixed climbing. It was harder than we’d expected. On this day we only climbed 250m and set up our bivy on the ridge.  The next day we figured that continuing the planed path with our gear would not be possible in the given situation so we passed around the rocky upper part to the right of the ridge and continued under the seracs. We topped out at 9 a.m. and descended to bivy No. 1. We continued our descent to the base camp the following day in bad weather. The weather was (except for the last day) perfect."

The new route is only the second to reach the summit of K7 West, after the line climbed by Marko Prezelj, Steve House and Vince Anderson in 2007. On their return to Slovenia Prezelj stated "I congratulate the boys, for they were really active during the expedition. A new route on K7W is an excellent  achievement – and only the second one to top out on its summit. Charakusa offers a wide range of climbing  choices and it is therefore of great importance to choose the optimum line in the given conditions. I am really glad about the success of the young generation, since it shows that classical alpinism still has its place in the future."

For the record, Sanjači zlatih jam translates as Dreamers of golden caves. Stražar explained "We, young guys, are often without money and thus often dream of golden caves."