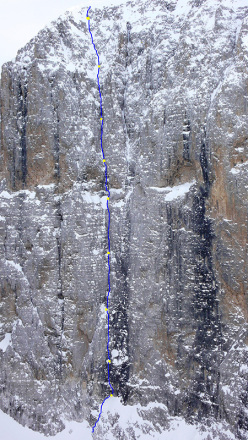 On 20 and 21 December 2015 Renzo Corona and Flavio Piccinini made the first ascent of Stralasegne (500m, M5 and 1 section M6) a new mixed alpine climb up the North Face of Pala di San Martino (Pale San Martino range, Dolomites). The report by Renzo Corona.

Over the last few years I’ve looked at the Pale di San Martino mountains with different eyes, scrutinizing not only the rock climbs, those with climbing shoes and chalk, the weave their way up slabs, arêtes, overhangs and pockets. Ice climbs are all the rage in the Dolomites, not only in the Western Alps, new drips have been climbed in the Brenta Dolomites recently… so surely there’s something in the Pale massif?

While making my way around the plateau in winter I always glance at the Pala di San Martino. It's a true north face: it never gets the sun, is hidden from view and is almost unnoticed even when skiing down the Pala gully. As they rip down the couloir they've hardly got time to stop and look upwards… ahh, these riders…

I’ve already climbed this beautiful and severe face in the past, up some new routes, there’s also the classic Solleder, wedged between one water streak and the next… so do these really never come into condition?

Take one, take two… I keep my eyes on the line, on that white streak that goes all the way to the summit, is it snow or ice? But it doesn’t stretch all the way down to the base. One year I decide to give it a go: gosh it’s cold… one pitch and then I’m done. The next year I wait a bit longer and then together with Flavio (Piccinini, Ed) we give it another shot. He climbs well, he’s one of the youngest Aquile di San Martino mountain guides, one of the best. We climb another five pitches, snow and a bit of ice, then we rappel back down, we’ve got to go to a colleague’s wedding.

The next year the face doesn’t freeze at all. Can it really be that conditions are never right? We’ll wait… is what we tell each other.

In mid-December I go to for a reccie, no snow but, hey, a white streak plummets from the summit, to within 50m from the ice… We’ve got to check it out: come on Flavio, this is our chance!

Beautiful. I feel like a child with his favorite toy: hard snow, ice, rock… we reach the cave, we’d been here before. It’s comfortable and in any case we’d never get to the summit in time. And so the odd one out, the haulbag, transforms into a welcome companion: a bivy in the heart of the North Face, with the sun setting over the Pale mountains… words fail.

The next morning brings with it the roof pitch, Flavio even clocks up some air time, after which we continue quickly upwards, following this streak of ice and vertical snow. Beautiful, it's hard to believe we’re in the Dolomites. The last pitch is easy… followed by snow and then… the summit. There’s the new Aquile bivouac… what a shame, I would have loved to sign the book, we’ll do so in spring. We enjoy the sun, fill our lungs with this crisp mountain air, then we head back down, abseiling into the shadow of the North Face.

The name? Flavio says he’s been thinking about it for a while: Stralasegne, which in dialect means the drips of water that fall off roofs.