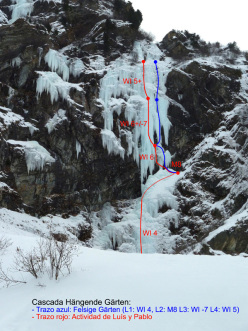 In mid January 2013 the Spanish alpinists Luis Penín and Pablo Gomez migrated north from their home town in Granada all the way to Austria's Tirol where they made a fast repeat of Felsige Gärten the M8, WI 7- ice and mixed climb established last year by Christian Piccolruaz and Albert Leichtfried. Felsige Gärten is a variation to the iconic Hängenden Gärten when this doesn't come into full conditions, as was the case on 15 January when the Spaniards climbed the route.

"Luckily the mountain does not respond to pure mathematics" explained Penín, adding "this year the ice structure was formed with some variations compared to last year, which made it possible to climb a variant on second pich and a direct alternative on the pure ice, dispensing with the two bolts in the third pitch."