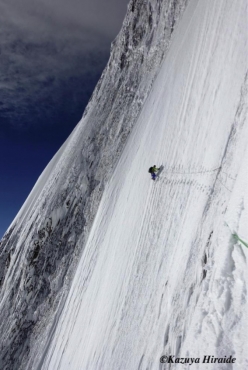 Kenro Nakajima tackling the crux section between Camp 2 and Camp 3 while making the first ascent of the NE Face of Shispare (7611m), Karakorum together with Kazuya Hiraide
Photo by archive Kazuya Hiraide 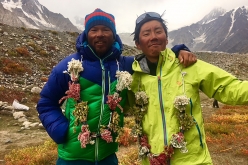 Kazuya Hiraide and Kenro Nakajima after the first ascent of the NE Face of Shispare (7611m), Karakorum
Photo by archive Kazuya Hiraide 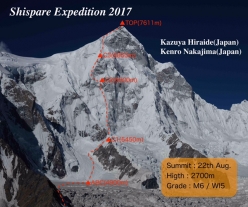 The line of the first ascent of the NE Face of Shispare (7611m), Karakorum, climbed by Kazuya Hiraide and Kenro Nakajima from 18-24/08/2017
Photo by archive Kazuya Hiraide

Towards the end of August Japanese mountaineers Kazuya Hiraide and Kenro Nakajima succeeded in forging the first climb up the striking, difficult and coveted NE Face of Shispare, the 7611 meter high peak in Pakistan’s Karakorum.

After reaching Base Camp on 26 July, two days later the duo ascended to 5600m up the original route, establish in 1974 by a Polish-German expedition led by Janusz Kurczab. The idea was to follow this line not only to acclimatise, but also to reconnaissance the descent route. A second acclimatisation phase took place at the start of August by climbing up to 6750m on nearby Pasu Peak (7478m), and after a first attempt up Shispare failed on 13 and 14 August due to snowfall, the two were poised for their second attempt.

On 18 August Hiraide and Nakajima climbed to Camp 1 at 5450m, and the next day they pushed on to 6500m where they established Camp 2. After dealing with the crux section of the climb, Camp 3 was established on 20 August at 6850 m. Because of heavy snowfall and zero visibility the two were then forced to take a rest day and stay put in Camp 3.

Although Nakajima began showing signs of mountain sickness, at 6 am the following morning the duo headed on upwards. After ploughing through deep snow they reached the summit at 14:30. Worried about the bad weather they descended immediately, using a compass to located their rucksacks they had deposited 400m below the summit, before making another bivouac at 7200m. Bad weather continued throughout the next day and, following the by no means easy original route, they managed to descend to 5750 m where they spent the night on the mountain once again. On 24 August, seven days after having set off, they returned exhausted to the Base Camp.

The new route - climbed in impeccable alpine style - deals with difficulties up to M6 / WI 5. This was Hiraide’s third attempt at the mountain; in 2007 he the NE Face, while in 2012 and 2013 he attempted the SW Face.