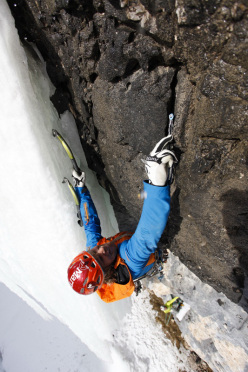 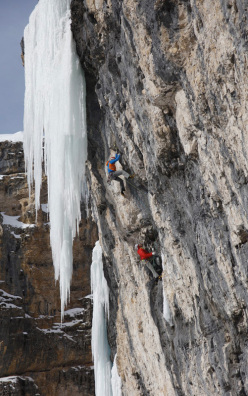 Interview with Albert Leichtfried after the first ascent together with Benedikt Purner of Senza piombo, the new mixed climb established in Vallunga with difficulties up to M10 WI 5 protected only with trad gear and without bolts and pegs.

Establishing a new M10 isn’t an everyday occurrence. And it certainly isn’t an everyday occurrence that M10’s are first ascended in a clean style, i.e. without pegs and bolts and using only nuts and friends to protect the pitches and belays. We’re obviously talking about Senza Piombo, the beautiful and difficult new route first climbed by the Austrians Albert Leichtfried and Benedikt Purner, two ice climbing specialists who have made a step forward with this new climb. Unsurprisingly the route is located in Vallunga, in the heart of the Dolomites which historically has been an important testing ground where to experiment with and raise the bar of alpinism and climbing. Time will tell if this M10, established ground-up and with only nuts and friends, is something special. In the meantime here are Leichtfried's views.

Albert, tell us about the start. When did you see this line for the first time?

In 2006 while I was doing Illuminati. It was immediately clear to me that there was more potential further to the right. But the right moment only came along this year, we’d been very active in Vallunga all of January. The 2006 line was one of our main goals.

Was it clear right from the outset that the route would go without pegs and bolts?
No, on the contrary, it was obvious that it would not go without pegs. So we took them with us. I’d say it was just luck that the rock always accepted nuts and friends.

From a pure ethical point of view, would it have been better to set off without bolts and pegs, as for example Holzknecht and Moroder did on their Via Legrima up Sassolungo?
We are both convinced that although we’re are committed to climbing as clean as possible, if we have to risk our lives for a route, then we’re certainly choose to place pegs or bolts.  It’s not us who decide this, but the rock itself. It may also be that the rock doesn’t accept natural pro, and sometimes a face can’t even be climbed. This is why we had pegs and bolts stashed in our haulbag all the up Senza Piombo. It only became clear to us during our ascent that it would be possible to climb the route clean. You can’t consciously seek for a route like this, all you can do is remain flexible and gratefully accept what the rock offers.

How was the pro on the pitches? And what about the belays?
The rock quality was surprisingly good and compact. The cams and threads were generally good quality. Out stance was comprised of two friends and a thread and although this wasn’t the same quality as a bolt belay, it was nevertheless sufficient.

How often do you fall on ice climbs? Or rather, the 2 falls off the 4th pitch were something unusual for you, right?
Falls on ice climbs are very rare and should be avoided if possible. On mixed terrain things are different and falls aren’t uncommon. But to fall of a mixed route, onto cams, yes, that was something new for me.

The two dry tooling pitches are each 20m long. How’s the belay in the middle? Might it be possible to make it into a single pitch?
Mother Nature provided a superb natural rest point for the belay. It would be pointless therefore to do things differently.

How would you compare the route is not so much to the Illuminati, which although close by is very different in style, but to your difficult and dangerous Centercourt on which you placed a single bolt?
Of course it’s something special when a route is climbed absolutely clean. But I’d place the bolt on Center Court again today, my life is more important to me than not placing a bolt.

Tell us about this clean style without pegs and bolts. We recently reported about some great stuff done by Hansjörg Auer in the Ötztal.
We've been climbing as clean as possible for a few years now and Senza Piombo was our fourth clean climb this season. But as I already mentioned, it's important for us to have fun when climbing. Regardless of whether with bolts, pegs or clean. Perhaps many climbers aren’t ready to accept this kind of openness. A beautiful clean route we’d first ascended in Vallunga, with good natural pro and not impossible at M7, was recently “killed” with 9 bolts despite clear traces of our first ascent. When Benni approached the Italian trio, it seemed to him as if they made fun of us.

Everyone interprets this game of ice and mixed as they want to. What’s your underlying idea, what’s important for you?
To have fun, be as open as possible about what you do and respect each other.

Clarification by Albert Leichtfried on 15/02/2013
As I explained in my report, at the start our original intention wasn't to climb the route clean right from the outset. So on the first day two bolts were placed , 1 at the 3rd belay and 1 above this belay. When however it became clear that the route could in fact go clean, the bolts were removed and the route was climbed without them three days later.
Albert Leichtfried