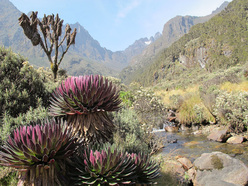 Ruwenzori: on the Central Circuit Trail
Photo by Davide Orlandi 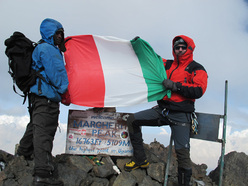 Ruwenzori: David Orlandi on the summit of Cima Margherita 5109m, the third highest mountain in Africa.
Photo by Davide Orlandi 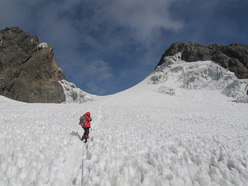 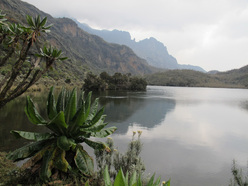 Rwenzori and Margherita Peak, the third highest mountain in Africa

David Orlandi introduces the Central Circuit Trail in the Rwenzori mountain range in Uganda and the ascent of Margherita Peak 5109m, the third highest mountain in Africa.

During an Italian expedition last February to Uganda, David Orlandi, Angelo Chimenti and Simone walked the Rwenzori Central Circuit trek and summited Mount Speke and Margherita Peak, at 5109m the third highest mountain in Africa after Mount Kilimanjaro 5895m and Mount Kenya 5199m. Orlandi talks about these distant, little known mountains which, at times, have more charm than the usual overcrowded peaks...


Ruwenzori. The Lord of the rains and the Mountains of the Moon
by David Orlandi

The Ruwenzori mountain range stretches about a hundred kilometres along the border between Uganda and the Democratic Republic of Congo and is comprised of six main massifs, Baker, Emin, Luigi di Savoia, Speke, Gessi and Stanley. At the start of the twentieth century these mountains were still largely unexplored, their peaks unclimbed, and Uganda was an immense region of lakes, dense forests and malaria infested swamps. Kilimanjaro and Kenya had already been climbed and the third highest mountain in Africa, the Ruwenzori, remained virgin.

The Duke of Abruzzi, who had carried out the grandiose conquest of Mount St. Elias in Alaska and had returned from an expedition to the Arctic, began to ponder about this challenge until, in 1906, he departed for Africa with his climbing and scientific expedition which proved highly successful. The highest peak was ascended and named Cima Margherita in honour of the Italian Queen Margherita who had financed the expedition. Numerous minor peaks were ascended and a large amount of scientific data was collected concerning the local flora and fauna. Photographs were taken, maps were drawn and thanks to this history these mountains are closely linked to Italy.

Fascinated by the story and eager to see these places, in February Angelo Chimenti, Simone Signori and I set off for Uganda with an expedition sponsored by the Grosseto Mountaineering Club. The aim was to discover the so-called Mountains of the Moon, to retrace the steps of the Duke of Abruzzi and his 1906 expedition, enjoy an adventure of days past along the Central Trekking Circuit and ascend Mount Speke 4890m and Cima Margherita 5109m, the highest summit there.

From the capital Kampala we travelled north to reach Fort Portal, the last place to buy provisions, then we reached the small village of Ibanda, the gateway to the Rwenzori Mountains National Park. The park office is located close to Ibanda where we completed the necessary paperwork and permits, prepared and weighed the luggage, recruited porters. This is where mountain rescues are co-ordinated but unfortunately carrying out emergency operations is no mean taks due the mud, rain, the rough and slippery terrain, the distances and the areas morphology, in particular in the upper section of the trail which is barred by the Freshfield Pass 4282m and the Scott Elliot Pass 4372m. There are no helicopters and reporting about accidents quickly is out of the question. The only means of communication is by walking to the closest village and this can take a couple of days. So... accidents are best avoided.

Ibanda is located at an altitude of 1600m and the Central Circuit trail starts from here and winds its way via various stages through the dense, hot and humid rain forest past bamboo forests and the magnificent landscape of giant lobelias and Senecio plants to enter an alpine environment and, finally, the glaciers beneath the highest peaks. Every day we had to fight against the heat, cold, mud, rain, rough and winding paths and slight problems connected to the altitude, food and water which was not suitable for drinking. We slept the night in rather spartan wooden huts, ate by candle light, drank the water from nearby streams, chatted away under the African stars... until the cold sent us to an early rest in our sleeping bags, ready for the next stage.

Meeting someone along these trails is highly unlikely, time passes slowly and gradually you immerse into an atmosphere of times gone by, made of fairy-tale trees, colourful birds and the thousand sounds of the mountains. One step follows the other, past thick roots, rocks and butterflies, and one day after the next leads to the glacier beneath Margherita Peak, that very same glacier which the Duke of Abruzzi was the first to climb and which, at the time, must have felt far larger than today. That glacier that had wowed the early explorers and which surprised us now for its unusual location for these eternal snows.

After having climbed past the numerous crevasses, wide open due to the recent dry climate, I reached a huge serac which loomed high above and as I climbed over the last rocks I hoped it would hang on a little longer before collapsing. I reached the summit of the highest peak in Uganda, the third highest in Africa, at 9:15. Once upon a time everything here was covered in ice, but now the summit was nothing but bare rock. I tried to imagine the first ascent carried out by the Duke, the last steps taken to reach the virgin summit, the dream of making exploration history. I looked around, down onto the deserted glaciers, to the lonely faces. There were no climbers in a row, no nearby cable cars, helicopters or crowded, noisy huts. Things probably weren't much different then, only more ice. I think about the glacier which is slowly but surely disappearing. I tried to absorb everything, this mountain all to ourselves, these wonderful people who inhabit the slopes, the wind on the summit, the emotions. I smiled, thinking of this lonely place and out mountain huts which need booking in advance. I smiled and began to descend.


Rwenzori Central Circuit Trail
A seven day trek which reaches a maximum altitude of 4372m when crossing of the Scott Elliot Pass. To reach the 5109m high summit of Margherita Peak 5109m a detour from the main circuit is necessary, by spending the night at 4551m in the Helena Hut.