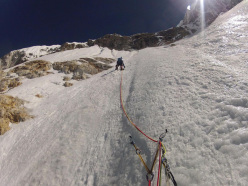 Towards the end of September Thulagi Chuli, the 7059m peak close to Manaslu in Nepal's Himalaya, was finally climbed by Aleksander Gukov, Ivan Dozhdev, Valeriy Shamalo and Ruslan Kirichenko from St. Petersburg, Russia.

On 10 September the Russian mountaineers established Base Camp at 3665m at Dharmasa and then spent the next ten days acclimatising and looking for a feasible line up mountain's West Face. On 18 September they established ABC at 5750m and descended to BC to rest and sit out the poor weather, and returned on the 21st only to discover that an avalanche had completely wiped out their high camp, taking with it much of the gear including their ice axes. It's superfluous to think what would have happened had they been in the tent when the avalanche occurred...

After much searching the next day they located two of the six axes and with the only other tool they had spare they decided - along the lines of "three axes for four men wasn’t so bad" - to nevertheless proceed with the ascent.

Due to threatening seracs they opted to climb slightly further left than originally planned, up an icy wall towards the NW crest. On 24 September they set off at 06:00 from their new ABC at 5850m and reached the crest at 7pm, having breached three rock pitches and ice that steepened gradually from 55° to 70°. Upon reaching the crest they dug a snow cave and, as Gukov states, then "spent the night as kings."

They resumed climbed at 08:00 the next morning, continuing along the ridge past relatively straightforward climbing except for the serac which was breached with one vertical ice pitch. In perfect weather the four summited at 15:50, with Dozhdev celebrating his 29th birthday by making the first steps onto the unclimbed summit. Two hours later they made it safely to their snow cave, at 16:00 on 26 September they returned to their ABC having descended along the line of ascent, while on 27 September they safely returned to Base Camp.

The 1850m new route is called Happy Birthday and has been graded 6a on the Russian grading scale, or TD+, VI (5c), AI 4+, M4 overall. According to the Russians, Thulagi Chuli had been attempted at least six times in the past by various different expeditions.

This year Alexander Gukov was awarded one of the three Piolets d’Or 2015 for his ascent of Nepal’s Thamserku (6,618 m) together with Alexey Lonchinsky. The other two awards went to the Americans Tommy Caldwell and Alex Honnold for the traverse of the Fitz Roy range in Patagonia, and the Slovenians Ales Cesen, Luka Lindic and Marko Prezel for their ascent of Hagshu in India.

For more information about the Thulagi Chuli ascent check out www.mountain.ru