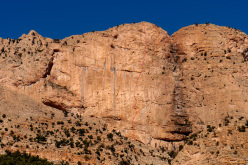 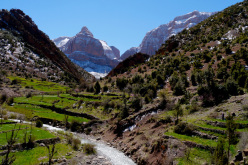 German climbers Roland Hemetzberger and Fabian Hagenauer have made the first ascent of Tabula Rasa (250m, 8b) on the Paroi de la Cascade, Taghia, Morocco.

The Taghia Gorge really does seem to be growing in popularity. After the recent first ascent of Azazar by Ines Papert, Lisi Steurer and Patrik Aufdenblatten, the latest creation in the spectacular Moroccon gorge is Tabula Rasa, a 250m line with difficulties up to 8b. The new route was established by German climbers Roland Hemetzberger and Fabian Hagenauer and is located on the Paroi de la Cascade, the face first breached in April 2010 by Frenchmen Arnaud Petit and Sylvain Millet with their Babybel (8a), while in 2011 Petit returned with Aymeric Clouet and Enzo Oddo to established Walou Bass (150m, 8c).

Hemetzberger and Hagenauer spent 5 days in early April establishing the route and all pitches, except the first, were forged ground-up; the starting pitch was bolted from above seeing that the first belay can accessed easily from the side.

"We worked our way up slowly but surely without fixed ropes or prior knowledge of the face" explained Hemetzberger, adding "Just like the French our idea was to climb the most logical line with a minimal amount of fixed gear. Our route takes a line circa 50m to the right of Babybel and 100m to the right of Walou Bass through a spectacular, steep section of the face. Reaching the summit after five days was amazing, we'd fought hard against holds suddenly breaking, occasional long run-outs and difficulties up to 8b. Redpointing the route on a single day was amazing and due to the rain even the last 7a pitch, which has just a single bolt and therefore needs trad pro, proved a real adventure."

While all belays are bolt protected, due to the long run-outs Hemetzberger is keen to underline that Tabula Rasa should be considered "a modern alpine sports climb."

Thanks to: www.speleo-concepts.com for the bolts.