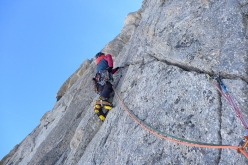 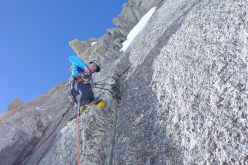 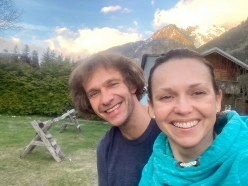 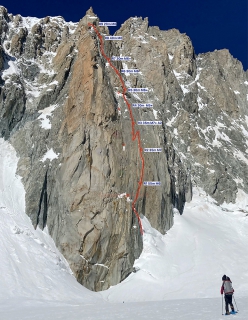 On 17-18 April 2022 the Polish climbers Gosia Jurewicz and Józek Soszyński established a new mixed route they have called Resurrection on the NE Face of Pointe de l’Androsace in the Mont Blanc massif. The duo spotted the 300m line last October while repeating An... ice surprise (Enrico Bonino, Giulia Venturelli 2014) and returned to the mountain this April with this new route in mind.

After setting off from Courmayeur in Italy, the reached the base of the mountain on the 17th and started climbing at about noon; after 3 pitches they bivied in their small, self-built portal edge and spent the next 17 hours there due to strong winds. They continued climbing at 10:00 am the next morning and completed the route the next day.

Resurrection shares the first 20 and last 30 metres with An…Ice Surprise, breaches difficulties up to M7+ and A2, and has been described as "beautiful, solid, sustained, engaging and rewarding. Technical difficulties in cracks, safe protection and belaying. Highly recommended."