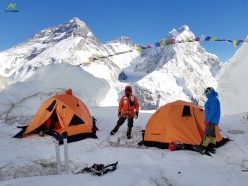 Alex Txikon in one of the camps on Pumori, climbed with Ali Sadpara, Nuri Sherpa and Temba Sherpa. In the background, from left to right: Everest, Lhotse and Nuptse
Photo by archive Alex Txikon 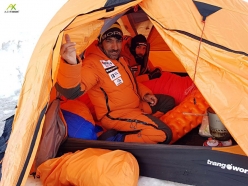 In preparation for the winter ascent without supplementary oxygen of Everest, Basque alpinist Alex Txikon and Pakistani mountaineer Ali Sadpara climbed Pumori, the beautiful 7161m summit in front of Everest. Nuri and Temba Sherpa also reached the summit. The report by Domenico Perri.

On 20 January 2018 Alex Txikon, Ali Sadpara, Nuri and Temba Sherpa reached the summit of Pumori (7161 m) at 11.29. At 11.37 they started their descent. The team started at 6:00 am from Camp 3 and, despite strong winds, reached the summit in good condition and feeling good ('buenas sensaciones').

Mount Pumori, also known as "The Mountain Daughter", is considered one of the most beautiful mountains in the world. This summit represents an important challenge; last Thursday the mountaineers began the climb up Pumori, in preparation and acclimatization for the bigger challenge that lies in store.

On his return Txikon stated: "We are very happy, the views from the summit were truly outstanding! Despite the very strong wind we are all fine, Ali, Nuri, Temba and myself. Pumori is a very technical and at times dangerous mountain."