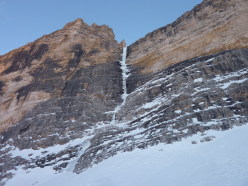 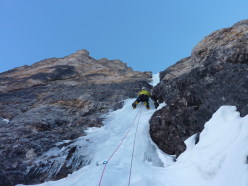 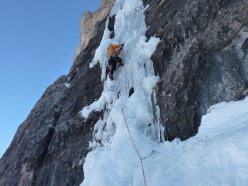 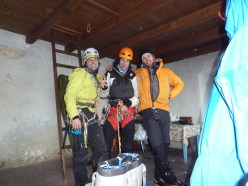 January 12, 2013. A unique day, certainly one to be remembered for the alpinists Beppe Ballico, Andrea Gamberini and Marco Milanese who succeeded in climbing what they describe as being "a perfect line", one of those routes that leave their mark just by looking at it. We're talking about Psyco Killer, the slender, beautiful and difficult 225m drip that rarely forms on the west face of Tofana di Mezzo in the Italian Dolomites. The climbing was anything but easy, with difficulties up to WI7-. The three climbed the route after spending the night in the Cantore bivouac and theirs is probably the first ascent of this "true pearl of the Dolomites." That's why we've published their full report, written by all three.

THE FIRST ASCENT OF THE ICEFALL PSYCO KILLER by Beppe Ballico
There are moments when your mind needs new ideas, new sensations. In short, for us climbers this translates into those routes that make your eyes twinkle for days on end and all you can do is ramble on about it. I call these: unique days. As unique as the climbing partners, those who not only provide safety, they're also great fun to be with. On 29 December I received an email from a dear friend, a ski mountaineer who sent me some photos of an icefall. The beautiful, vertical white line cut straight down the yellow face, I was amazed.. I could already savour the approach, the bivouac, dinner with my partners and then of course the climb itself, the ice at altitude, the wind chill, the remoteness, the creaking of footsteps in the snow, the silence, that deafening silence far removed from everyday life.
All I had to do now was find someone who was free to climb during the week. But not just anyone; maybe even two climbers, those who I felt safe to climb with, who'd be willing to do the walk-in, bivy the night out, accept the cold... There aren't too many climbers with these characteristics and so I needed to check out whether they were free or not. lo and behold, neither Marco nor Andrea would miss out on such a wonderful opportunity. Both are partners in crime during old and more recent adventures and both share my desire for ice, the mountains and my dogged determination. All that was needed now was to wait for the right cold conditions to set in.
In the end we experienced two days which will prove difficult to forget, that fun evening in the bivy, where each laugh made us shake off the cold, Marco dressed like a Taliban with a blanket wrapped over his shoulder while and Andrea displayed his superb culinary skills. All the while anxiously awaiting the climb. The next day proved special, I can still clearly remember the ice axes hitting that vertical, fragile and slender ice, those delicate hooks up overhanging "meringues", the cold we endured, always tense, adrenaline pumping. And then there was that amazing descent from Rifugio Dibona, with the sledge, laughing like fools. This is my way of taking to the mountains, my way of experiencing adventure, sharing it with my partners. Now though it's time for Marco and Andrea to take over.

A MOMENT TO REMEMBER by Andrea Gamberini
We're at the belay, sheltered in the niche below the last pitch. The belay is excellent, two ice screws and a sling wrapped around a large drip, our feet rest comfortably on the ledge of hard-packed snow. Midday has just slipped by and the first rays of sun have already appeared from the south, onto this massive face on Tofana di Mezzo. The warm sun will keep us company, warm our bones and boost our morale for another hour, before disappearing behind the famous "big" Tofana di Rozes, leaving us in the shadows once more. In the distance we can make out the hut in Val Travenanzes and, even further still, the Lagazuoi Nord. Clinging to this impressive line of ice we find ourselves completely immersed in this scenario of Dolomite peaks and faces which blaze alight, creating a
truly surreal atmosphere.
Sometimes I wonder how we can love the cold season so much, it can't all be due to the ice and out love for ice climbing. In winter, a apart from the cold and loneliness in certain mountains, you can taste something extra, often inexplicable. I look away from the void that plunges down to the base of the wall and the icy breeze that had accompanied us since dawn dissolves. Until a few moments ago we had wondered why we were here, stuck on this hard line, but now that the sun is soothing our morale and now that we're only forty metres short of the top, we're overcome with the conviction that we've succeeded.
All that is missing now is the grand finale. Beppe, keener than ever, has just set off up the last pitch, he climbs decidedly, smiling, up the frighteningly vertical final 40 metres while Marco and I discuss everything about this climb. Not without difficulties but with great class Marco had borne the physical and moral strain of having to lead the previous two pitches. Situations like these sometimes force you to accept moments when extreme concentration mixes with a disinterested indifference!
I've climbed other difficult icefalls hard in the past, with other great partners and the night before our climb I'd got a fair idea of it all when observing the drip through my binoculars, certain that supreme difficulties lay in store. The "problem" with difficult icefalls is that from afar they seem really hard, from below they become more attractive and when you're in the midst of things they suddenly become far harder than before!
The recent warm temperatures and wind had dried the ice and reduced its thickness, "gifting" us with anorexic drips, unstable curtains and pro which at times was difficult to place and "random" (Manu, 2013)! The pitches fit into the category of those which make your mouth run dry, which really get you pumped and which slowly but surely do your head in! The commitment was daunting, despite only having to second the route... we had to fight slowly to get past the crux, hook delicately, tiptoe on miniscule crampon points, avoiding vigorous blows, inventing improbable rests so as to get your pulse down and breathe deeply...
The excitement was intense, and still is... overwhelming... having climbed a new icefall such as this one in the heart of the Dolomites! Thanks guys for the adventure, great company and for having taken part in this ascent. Bravo Beppe, bravo Marco! Once "on top" all that was left to do was to shake hands and slide down the abseils to the base of the climb and return home, accompanied by the winter sunset!