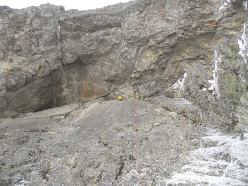 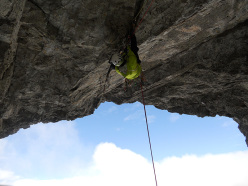 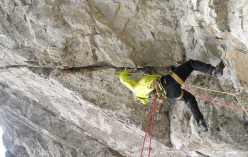 PORTFOLIO / gallery Portfolio: Pavol Rajcan and the King Overhang in the Tatras

Pavol Rajcan and the King Overhang in the Tatras

The reason for this is probably the awareness - more or less widespread - that these rugged peaks are, in particular in winter, a harsh and wild environment: historically they have represented an extraordinary breeding ground for generations of "Eastern bloc" mountaineers, similar in some respects to what Ben Nevis represents to Scotland's climbing. It is thanks to the experience gained here that a group of stubborn, tireless climbers subsequently moved on to tackle, with considerable success, some of the most important mountain faces in the world.

This report is the chronicle of a great achievement accomplished by two young Slovak alpinists, Pavol Rajcan and Pavol Sulak who, in breaching the 300m face in drytooling, probably carried out one of the most difficult ascents in the world of this sort.

The M12 grade itself suffices to give a good idea about the level of difficulties these two strong climbers faced. The spectacular and technical crux is located at half-height and crosses the gigantic 20m roof that gives the route its name. Rajcan managed to free the thin crack that splits through the roof thanks to a series of acrobatic moves and using trad pro.

The subsequent pitches climb vertical, at times overhanging terrain, are proved extremely challenging, too, both physically and psychologically. The rock offers little protection and the pitch after the roof is protected by an absolutely rusty, unsafe old bolt from which a 10m slab must be climbed with bated breath, ropes dangling wildly in the wind with no protection to speak of.

Rajcan is not new to to this level of mental and physical commitment hence the M12 grade he has suggested which underlines the absolute valor of this multi-pitch climb in an alpine environment. This grade comes on the basis of his past ascents that include, amongst other: