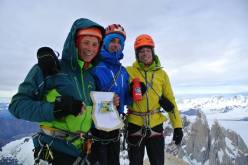 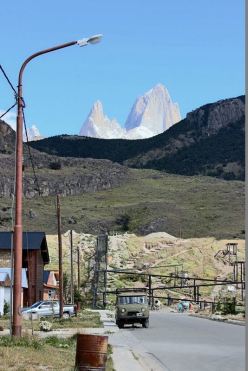 The two Italian Ragni di Lecco alpinists Luca Schiera and Matteo della Bordella, and Swissman Silvan Schüpbach have climbed what they have called the Californiana Sit Start, an enchainement of Aguja de la Silla with Cerro Fitz Roy in Patagonia.

While on the Fitz Roy and Patagonia theme, it's worth noting another traverse carried out during the same time period as the incredible Tommy Caldwell and Alex Honnold traverse, namely that of the two Italians Luca Schiera and Matteo della Bordella and Switzerland's Silvan Schüpbach who enchained Aguja de la Silla with Fitz Roy. The same trio therefore who forged a new line up Uli Biaho in Pakistan's Trango massif last summer has now returned from a four-day trip that took them up Aguja de la Silla's east ridge and then Fitz Roy. They bived circa 100 below the summit of Fitz Roy and then reached its highest point the next day and after the descent della Bordella and Schüpbach returned to El Chalten while Schiera remained out in the open for another night... to enjoy the stary night all alone. It's worth pointing out that before climbing the east ridge the three negotiated circa 400m of hitherto unclimbed terrin up mixed slabs and gullies that led from Nipo Nino via Hombre Sentado to Col de los Americanos. The new combination has been dubbed "Californiana Sit Start" and graded 1800m 6a+ C1 M4/5. The traverse is a great prize, plucked at the last moment when the summer season seemed to have come to an end and they were about to return home. Just like the fast ascent of Fitz Roy, once again via the Californian route, by Davide Spini, Mirko Masè and Bruno Mottini "when the aeroplane for Italy was practically warming its engines on the runway."