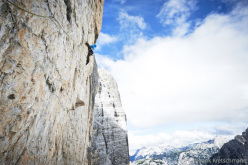 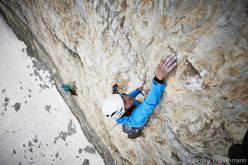 On 17/08/2014 German alpinist Ines Papert made the first one day ascent of Ohne Rauch stirbst du auch 8a, a route established in 2010 by Hannes Pfeifhofer and Daniel Roger. The second free ascent was carried out by Austria's Lisi Steurer on 28/08/2014.

Eight years after the first female ascent of Camillotto Pellesier on Cima Grande in the Dolomites, this summer Ines Papert returned to the legendary North Face to make the first free ascent of Ohne Rauch stirbst du auch. This route had been put up in summer 2010 by South Tyrolean mountain guide Hannes Pfeifhofer and his climbing partner Daniel Roger up the lefthand side of the North Face and, according to Papert, is marked by its "superb, independent line and its – almost always – comfortable belays." Pfeifhofer and Roger had breached difficulties up to 8a, freeing the individual pitches on separate occasions, meaning that the first, single-push free ascent was still up for grabs.

Papert travelled to the Italian Dolomites this July together with her habitual climbing partner Lisi Steurer and in their own words the duo spent the first week concentrating more on the film work than the actual climbing, believing that a long, hot summer lay ahead of them. They couldn't have been more wrong: the Alps and the Dolomites in particular experienced one of the wettest summers on record, forcing the two to return home, frustrated and empty-handed.

In mid-August a brief respite in the weather provided the chance they'd been waiting for and on the 17th they returned to the base of the route. At 6:30 am the temperature had dropped down to -3°C; Papert won the toss for the lead and began the long climb upwards. Despite freezing fingers the German managed to free climb the entire first pitch straight off, no mean feat seeing that this "warm-up" is graded 8a and, as it happens, also the hardest pitch of the entire climb. The two however knew that the journey had only just begun, that above them lay 500 bitingly cold metres. This is the reason why Papert fell once on the second pitch, a stiff 7c; she immediately lowered to the stance and then redpointed this pitch, but from here onwards she made no more mistakes. At 17:30 the two reached the ledge system and descended down the normal route.

The project was not completed: the idea was to return in the next few day for Steurer's lead, but once again rain stopped play and the two were forced to abandon plans since Papert had to return home. Steurer stayed put and on 28 August she was finally rewarded for her patience with a break in the weather: together with her partner Felix Tschurtschenthaler she managed to free climb all the pitches, falling only once on pitches 1 and 2 prior to successfully redpointing them.

After her free ascent Papert commented that due to the route's grade – certanly difficult but nevertheless by no means not impossible - they had probably approached the climb in a slightly too relaxed manner. "The North Face of Cima Grande requires total concentration and doesn't give in easily, to no one and for no reason. To climb a route like this everything must be absolutely perfect, and that's why we're both overjoyed with our ascent."