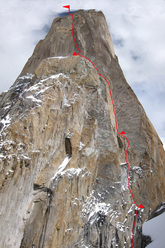 In August 2011 a Russian expedition established No Fear (6b+, A3, 1120m) up Nameless Tower, Trango group, Karakorum

A Russian expedition comprised of Viktor Volodin, Dmitriy Golovchenko, Sergey Nilov and Alexander Yurkin has forged a new route up the NW Face of Trango Tower. The Moscow-based climbers forged the 1120m long route, with difficulties up to 6b+, A3, over 10 days and encountered mainly overhangs and large corners in the lower and central section of the wall. They established three camps, used fixed ropes for the ascent and while conditions were fine during the first 5 days, the weather subsequently worsened with snow accompanying the summit push on 12 August. After the summit they rapidly descended to Camp 3, and abseiled back to ABC the next day.

While these four were involved in establishing the first Russian route up Nameless Tower, two other team members - Denis Saveliev and Georgiy Kozlov - successfully repeated the beautiful and difficult Slovenian route on the West Face. These 900m were established by Slavko Cankar, Francek Knez and Bojan Srot and then freed with difficulties up to 7a+ by Kurt Albert, Wolfgang Güllich and Hartmut Münchenbach. That was back in 1987 and from their vantage point the Germans spied a line which was to become one of the famous and yearned for routes in the world, Eternal Flame.


Nameless Tower
Nameless Tower, or more simply known as Trango Tower, was first ascended in 1976 by the British climbers Joe Brown, Mo Anthoine, Martin Boysen, and Malcolm Howells after an epic unsuccessful attempt the previous year. Mo Anthoine and Martin Boysen reached the summit on 8 July while Joe Brown and Malcolm Howells summited the next day in worsening weather. The British route was graded VI, 5.10 A2, 1100m with circa 80% climbed free - at the time it involved some of the hardest rock climbing ever achieved at altitude. The Tower received its second ascent 11 years later by a Yugoslav team led by Slavko Cankar.