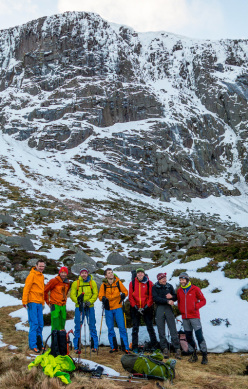 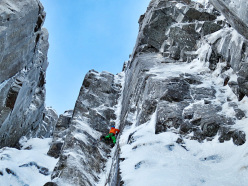 What happens when a small group of some of Britain's finest winter climbers decides to meet up beneath a remote, inhospitable crag that in its 30-year history has only been breached by four previous routes, and that happened to enjoy spectacular conditions? Total delirium. Or better still, all of a sudden that face no longer hosts four, but eight difficult routes.

All this took place on 11 January when Nick Bullock, Greg Boswell, Callum Johnson, Uisdean Hawthorn, Simon Richardson, Guy Robertson, Will Sim and Iain Small gathered at the Terrace Wall at Creag an Dubh Loch, "without question the steepest major cliff in the Cairngorms" to seize these superb conditions. Confirmed by Scotlandì's Richardson: "Yes, the terrible weather we had through December brought Creag an Dubh Loch into once in a lifetime conditions. We had very unusual set up of cool southerly winds blowing snow over the cliff from behind, followed by a series of rapid freeze-thaws. Nobody had ever seen it as icy before."

The four new routes have been called Take te Thron (VII,6), Defence of the Realm, The Cure (VIII,8) and Hustle (VII,7) and it's worth pointing out that the mountain is reached via a three-hour walk-in. Or two, if the path is clear enough of snow to get half way by bike...

Two days later Bullock and Robertson made the first ascent of Slenderhead, another interesting new route at Stob Coire Nan Lochan. This too is about 100m in length. And this too - like The Cure - has difficulties somewhere in the region of VIII/8. A grade that for many years was considered the non-plus-ultra of Scottish winter climbing and that is now beginning to be repeated and first ascended with greater regularity. For this reason, and to find out more about the particular nature of these routes, we asked Bullock to shed some light.

"As for the grade VIII/8 being climbed more I think it's similar with rock climbing. Barriers are broken by a few and people follow with better understanding, specific training and better equipment. I still don’t think there are millions of folk out there climbing VIII/8 on a regular basis, but the grade possibly does represent the higher level of what is just about safe with hard technical climbing for the fit and driven winter climber. New routing VIII/8 is something different again: with no knowledge or guidebook description, forging into the unknown is mentally very demanding and the climbing technicalities are only a part of the challenge.

Both new routes are winter only lines and both were climbed onsight, ground-up with no prior knowledge. This ground-up ethic is a part of the long list of complicated Scottish winter climbing ethics and I feel that this is important when our cliffs are so small. This ground-up onsight adds an extra aspect and makes a short climb feel a lot bigger. Slenderhead is a great example of a psychological challenge, as there was a definite point on the first pitch where to continue with poor gear, poor ice and no idea what was to come proved very challenging indeed. To have thrown a rope down it and see what was to come would have detracted enormously from the experience and in a way this would have brought the climb down to a level many people would have been happy to have attempted. This sounds elitist but climbing is inherently an elitist activity made memorable and fulfilling purely by the challenges it presents when certain rules are applied. This in turn sounds against what climbing should be about when applied to the winter cliffs, but style is very important and if only getting to the top of a climb is what matters, using any method out there, then we could just walk to the top of all cliffs in Britain."