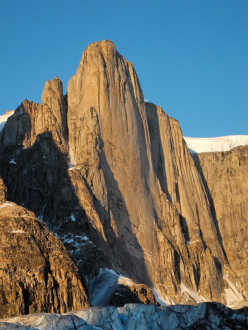 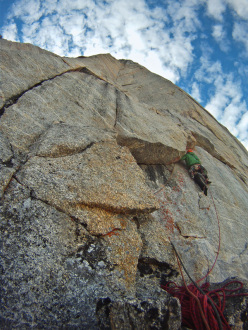 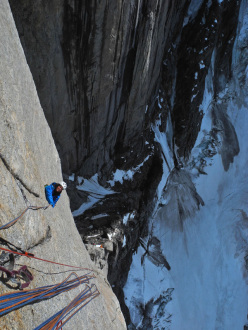 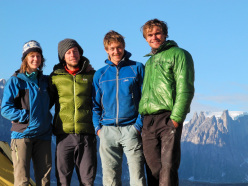 Based on the Edward Bailey glacier, the Swiss first set their sights on the huge 1200m high Mirror Wall and from July 11 - 21 forged Ledgeway to Heaven (7b+/A1, 45°). The team fixed the first 10 pitches, then continued capsule style with portaledges. The route they chose follows an obvious rightwards rising trad-line and in making the first ascent of this wall they left some in-situ gear - nuts, slings, pegs and 23 bolts - on the abseil only.

Two days later the four climbed a rock tower which they dubbed the Needle with difficulties in the region of V+ (D). Currently the authoritative American Alpine Journal has catalogued this as a first ascent and although no traces of previous climbers were found, due to its striking nature the Swiss believe the peak may have been ascended previously.

A few days later the expedition made a clean, alpine-style first ascent of Midnight Solarium, (7b, 45°, 1100m). This was climbed from 28 - 30 July, trad was used during the ascent, absolutely no gear was left in-situ and the descent was carried out down their Ledgeway to Heaven.

The weather continued to be favourable and from 3 - 5 August the alpinists made the first ascent, capsule-style, of Atropa Belladonna (7a+, 550m) up the previously unclimbed The Cockpit (Alpine Bowl). Some slings, nuts, pegs and 3 bolts were left behind during the abseil.

To end the trip in style, on 8 August the climbers made the first ascent, free and all onsight, of Die Ideallinie (7a, 500m) up a peak previously climbed by an Irish expedition called The Guerkin. This "ideal line" was climbed once again using trad gear and only a minimum amount of nuts and slings were left behind during the descent.

The four returned to civilization on foot, covering the 35km distance three times to transport all their loads. After the undeniable success Schüpbach stated: "Renland is still very remote and unexplored, offering an ideal venue for first ascents on granite big walls of up to 1000m in height – probably some of the tallest unclimbed big-walls on earth. Due to the lengths of the routes, the remoteness of the area, the pure style of the ascents and last but not least the high rock-quality encountered, we believe that this is a significant contribution to the development of alpine climbing in the area."