► News ► Alpinism ► New route on the North Face of the Matterhorn 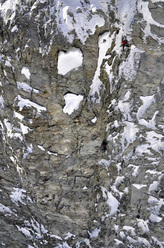 Jean Troillet, Martial Dumas and Jean-Yves Fredriksen have carried out the first ascent of "Sébastien Gay" (600m ABO) on the North Face of the Matterhorn.
Photo by Archivio Troillet

PORTFOLIO / gallery Portfolio: New route on the North Face of the Matterhorn

New route on the North Face of the Matterhorn

Swiss mountaineer Jean Troillet and the Frenchmen Martial Dumas and Jean-Yves Fredriksen have made the first ascent of "Sébastien Gay" (600m ABO), a new difficult route up the North Face of the Matterhorn.

Last Wednesday and Thursday the strong Himalayan mountaineer Jean Troillet (10 8000m peaks under his belt) climbed a new route together with Frenchmen Martial Dumas and Jean-Yves Fredriksen, to the left of the Bonatti route and to the right of the Schmidt route. The 61 year old had began the route three years ago together with Sébastien Gay, but at the time the two were force to retreat due to poor conditions. Unfortunately a few weeks later Sébastien Gay died in tragic speedflying accident, and now the untiring Troillet returned to the face to finish the project and dedicate the route to his climbing partner.

The first section of the new 500-600m route climbs a direct line between the 1935 route first ascended by Franz and Toni Schmidt, and Bonatti's great winter 1965 solo climb. After the first 400m up difficult vertical, almost overhanging terrain, the new route joins the Schmidt, then continues close to the Bonatti before bearing left towards the ridge.

The route gets an overall grade of ABO and Troillet describes it as follows: "The route starts steeply, the first 400m are almost overhanging. You have to see the plus side: this protected us from falling rocks. We bivvied on the face in a hammock. And as it's done on the Eiger, it isn't necessary to reach the summit to inaugurate a new route. The grade? Abo. Which stands for abominable."